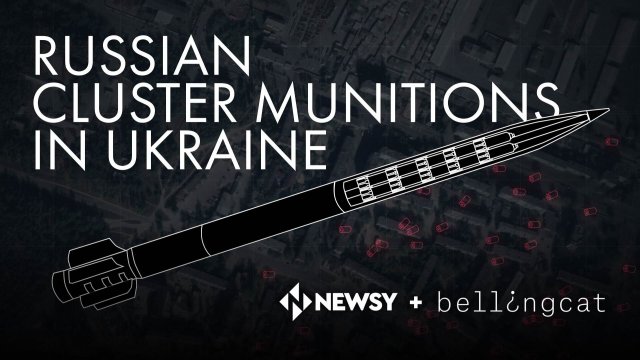 SMS
Russia's Cluster Munitions Will Still Affect Ukraine Years After War
By Jake Godin
By Jake Godin
March 15, 2022
Russia's use of cluster munitions will have long-term damage, as some bombs that didn't immediately explode can lie dormant for years.
SHOW TRANSCRIPT

In the first weeks of Russia’s invasion, there has been extensive use of different types of cluster bombs. Open-source evidence examined by Newsy and our partners at Bellingcat shows that in many cases, these weapons are being used in urban or residential areas — something that may be familiar to those who watched how the Syrian civil war unfolded after Russia intervened.

Finding and verifying visual evidence can reveal how these cluster munitions are being used and their impact on civilian targets in Ukraine.

In fact, there are so many instances of cluster munitions being used that it’s becoming difficult to keep track of it all. What we can do is confirm that they are being used, and that they are hitting civilian targets.

"So cluster munition is something that is a bomb or rockets or missile that contains smaller bombs inside it — submunitions," Bellingcat founder Eliot Higgins said. "And generally, they operate by opening in midair and releasing those munitions over a wide area, and that blankets the air with explosions and it's been used for targeting, you know, military units, for example, that might be in a field out in an open, but in a more significant way they're being used against civilian targets."

Higgins has been investigating cluster bomb use in conflicts for years.

"So we've been able to track the use of Russian cluster munitions through the conflict in Syria," he said. "We've seen it being used in the conflict in Ukraine in 2014, and it's something they use in a very widespread way in indiscriminate attacks on civilian populations before. But this is the first time that we're seeing it so well documented from the early days of a conflict."

Just as has been seen in Syria, Ukraine is now seeing buildings like schools, hospitals and residential buildings become targets in these types of attacks.

"At first, it did seem they were targeting places like airbases and power plants in places where there would be a kind of tactical advantage, but as the conflict just progressed, it seems to be more random, hitting civilian populations areas where there's no obvious targets, and there's no sign of military activity in those areas, either," Higgins said.

Bellingcat and Newsy have analyzed and verified dozens of these cluster munition attacks in Ukraine since Russia’s invasion began. Cluster bombs are banned by more than 100 countries, though neither Russia nor Ukraine have signed the convention that bans their use.

One early attack, just a day after Russia’s invasion started, hit a kindergarten in a city east of Kharkiv in northeastern Ukraine.

Videos and images from the attack showed multiple impact points where cluster bomb submunitions hit the building – and a cargo pod that carries such submunitions was found just 200 meters east of the kindergarten.

With images of that cargo pod, along with others found in the area, it's possible to get an idea of where the rockets were fired from.

"One thing that's quite distinctive about the rockets that are being used is that when they open up in the air, they split into two parts," Higgins said. "And they land rather like lawn darts. So you can actually see by looking at the impact crater, which way the remains of the munitions, you know, pointing, and that often points back to the point of origin."

This attack involved what is known as a 9M27K rocket — but this is just one of the cluster munitions seen being used in Ukraine by Russia.

"The most common type are ... multiple rocket launchers," Higgins said. "We've seen these all over Ukraine so far, including the city of Kharkiv, where they've been used a great deal to the point where there's piles of the remains of them being gathered. We're also seeing the use of long-range ballistic missiles carrying cluster munitions, and we've seen one example so far of an unguided cluster munition bomb and RPK 500 being used."

"What we're seeing as well with these cluster munitions is some of them are unique to the Russian military. So for example, this 9M54 guided missile that's being used at the moment. It's a radar-guided missile that is a lot more accurate. So you have something called the circular area of probability, which is the area where there's a 50% chance that the missile or rocket will hit. Now, if these earlier models are about 150 meters, so that's quite a large area of the newer models, you're looking at 7 to 15 meters. And this is significant because we're seeing these in civilian areas where there's no apparent military presence, there's no military targets. So it's very hard to avoid the conclusion that if with this small circle of probability, that they are targeting the civilian areas."

Cluster munitions have real long-term consequences beyond the immediate indiscriminate damage they cause. That’s because they remain a threat to civilians in the area for years after their use due to dud submunitions not exploding.

"So we're, I mean, so we've seen from previous conflicts going back to Vietnam, for example, that there can be decades of a legacy from the use of cluster munitions of people uncovering them, children picking them up, not realizing what they are," Higgins said. "And these things can still be dangerous for years, even decades after they've been used. They could land in a field and be buried in the mud, and a farmer plows them up and they explode and they kill the farmer. Or they could end up embedded in some kind of lake or, you know, some fish set up and explodes. There's all kinds of scenarios where this stuff could be dug up later. So the widespread use of costly munitions, particularly in civilian areas, presents not only an immediate risk, but also a long-term risk to the local people."

Based off evidence in past usage of cluster munitions by Russia in Syria, or even the U.S. in southeast Asia, there are likely to be thousands of unexploded submunitions left in Ukraine. However this war ends, they will cause lasting hazards to civilians who continue to suffer.