Russia Orders Evacuation Of Troops From Kherson Amid Ukrainian Gains 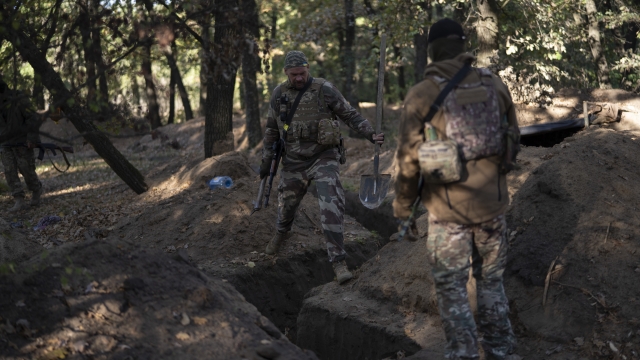 Russia promised accommodation to Kherson residents who want to evacuate to Russia, a sign of Ukrainian military gains along the war's southern front.

The momentum of Russia's war in Ukraine has shifted, as Ukraine's military pursues counteroffensives in the invaded country’s east and south.

The Kherson region's Moscow-installed leader asked the Kremlin on Thursday to organize an evacuation from four cities, citing incessant shelling by Ukrainian forces.

Vladimir Saldo, the head of the Moscow-appointed regional administration, said a decision was made to evacuate Kherson residents to the Russian regions of Rostov, Krasnodar and Stavropol, as well as to the Crimean Peninsula, which Moscow annexed from Ukraine in 2014.

"We, residents of the Kherson region, of course know that Russia doesn’t abandon their own, and Russia always offers a hand,” Saldo said.

Russia has characterized the movement of Ukrainians to Russia or Russian-controlled territory as voluntary, but in many cases those are the only evacuation routes residents of occupied areas can or are allowed to take.

Reports have surfaced that some Ukrainians were forcibly deported to “filtration camps” with harsh conditions. In addition, an Associated Press investigation found that Russian officials deported thousands of Ukrainian children - some orphaned, others living with foster families or in institutions - to be raised as Russian.

Ukrainian forces penetrated Moscow's defenses in the southern Kherson region, one of the four areas in Ukraine that Russia is annexing.

The evacuation announcement came as Ukrainian forces pushed deeper into the Kherson region, albeit at a slower pace than a few weeks ago. Ukrainian forces reported retaking 75 populated places in the region in the last month, Ukraine's Ministry for Reintegration of Temporarily Occupied Territories said late Thursday night.

A similar campaign in eastern Ukraine resulted in most of the Kharkiv region returning to Ukrainian control, as well as parts of the Donetsk and Luhansk regions, the ministry said.

Gen. Valeriy Zaluzhny, the commander of Ukraine's armed forces, vowed Friday that his forces would succeed in “getting ours back.”

"No one and nothing will stop us,” Zaluzhny said in a video message. “We have buried the myth of the invincibility of the Russian army.”

Friday was Defender’s Day in Ukraine, but celebrations were muted because of the war. For a fifth day, Russia continued missile strikes on critical infrastructure that started Monday in retaliation for an Oct. 8 truck bomb explosion on a prized bridge linking Russia to annexed Crimea.

Russia's retaliatory strikes, which Ukrainian authorities said killed dozens of Ukrainians this week, killed at least more nine civilians between Thursday and Friday, the Ukrainian president’s office said. The victims included an 11-year-old boy and six other people who died after a missile strike in the city of Mykolaiv, where a residential building was destroyed, the regional governor, Vitaliy Kim, said.

Russian forces on Friday carried out missile strikes on Kharkiv, Ukraine’s second- largest city, and in the Zaphorizhzhia region, home to Europe's biggest nuclear power plant. The U.N.'s nuclear watchdog has repeatedly warned that fighting at or near the Russian-controlled Zaphorizhzhia Nuclear Power Plant could trigger a potentially catastrophic release of radiation.

Putin has vowed to retaliate harshly if Ukraine or its allies strike Russian territory, including the annexed regions of Ukraine. Russian officials reported Friday that Ukrainian shelling blew up an ammunition depot in Russia’s Belgorod region on the border with Ukraine.

An unspecified number of people were killed and wounded in the incident, according to Russia’s Investigative Committee. Unconfirmed media reports said three Russian National Guard officers were killed and more than 10 were wounded.