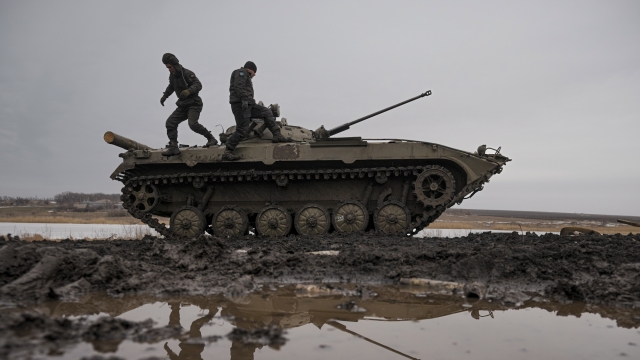 The footage includes what appears to be a mobile command center for orchestrating aerial operations.

These drills may further fuel western fears that Russia is poised to invade Ukraine.

All this is happening as new satellite images identify a new deployment of Russian troops, military vehicles and helicopters at an airfield around 15 miles from Belarus' border with Ukraine. Visible are what appear to be a troop housing area and field hospital.

Also spotted from the sky was a large new deployment of troops and equipment in Crimea, which is Ukranian territory that was annexed by Russia in 2014, at what had been an abandoned airfield.

A big question now is how long Russia can sustain its encampments near Ukraine in terms of cost and weather. The Pentagon thinks a Russian offensive would need frozen ground, and spring is coming.

"Prominent terrain includes flat open plains and there are abundance of rivers and lakes and there's a high-water table, and when that high water table freezes, it makes it for optimal conditions for cross country tracked and wheeled vehicle maneuvers," Joint Chiefs of Staff Chairman Gen. Mark Milley said.

In this window for a potential invasion, NATO is stepping up its military deployments to bolster its eastern flank.

American F-15 jets arrived in Poland Thursday as 350 troops from the U.K. also landed there. Prime Minister Boris Johnson, visiting a Polish military base, said the Ukraine crisis has become "the most dangerous moment" for Europe in decades.