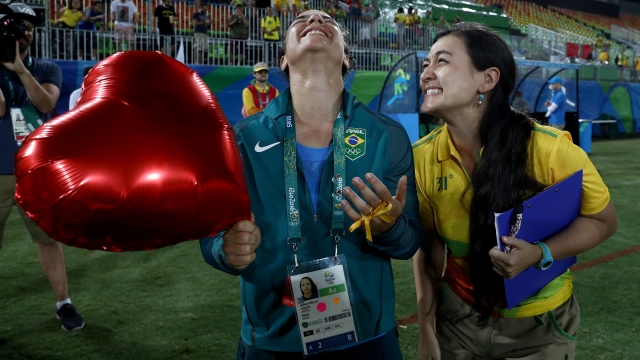 "I wanted to show people that love wins."

That's what Marjorie Enya set out to do Monday night at the Rio Olympics when she asked Brazil women's rugby sevens player Isadora Cerullo to marry her.

And it's safe to say she did just that.

It all started at Deodoro Stadium after Cerullo's team finished ninth in the Olympics' inaugural showing of the event.

After the medal ceremony, Enya, who happens to be a manager at the stadium, grabbed a microphone and gave an emotional speech to the entire crowd.

And, of course, Cerullo said yes.

Enya told the BBC afterward, "As soon as I knew she was in the squad I thought, 'I have to make this special.'

... The Olympic Games can look like closure but, for me, it's starting a new life with someone."

This video includes clips from Brasil Rugby and images from Getty Images.