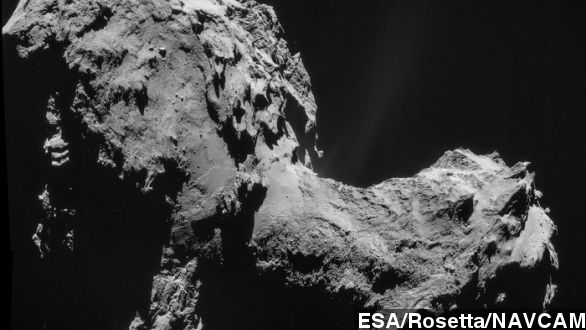 The Rosetta mission is close enough to its target comet to smell it.

The presence of these chemicals has come as something of a surprise to scientists, and not just because they smell bad.

Discovery explains “it was assumed that only the most volatile of ices — water and carbon dioxide — would be sublimated into space as the comet approaches the sun.”

It’s a low enough concentration that humans probably wouldn’t notice. New Scientist quotes Kathrin Altwegg, the scientist in charge of Rosetta’s spectrometer. "You would probably need a good dog to smell it."

In other words, 67P/C-G is already more active than we thought. In this image from last month, the comet was more than 280 million miles from the sun. It’s expected to release even more gases as it gets closer and heats up.

The European Space Agency explains “a detailed analysis of this mixture and how it varies as 67P/C-G grows more active will allow scientists to determine the comet’s composition,” and compare it to other comets.

Rosetta will have a year to gather that sort of data. The mission is expected to last at least that long as the comet swings around the sun.

Its historic first step will come next month. Rosetta’s Philae lander will touch down in the first soft landing on a comet and begin analyzing the surface of 67P/C-G on November 11. (Video via European Space Agency)