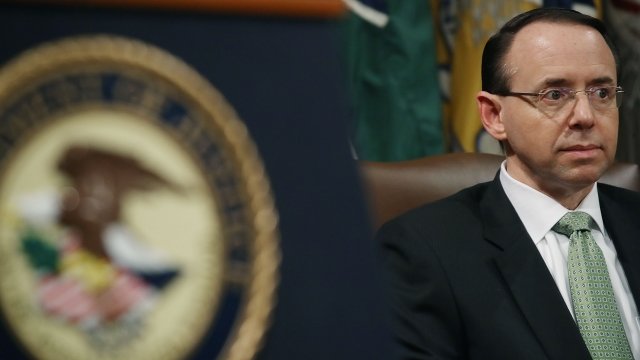 SMS
Rod Rosenstein Doesn't Seem Worried By GOP Impeachment Threat
By Jake Jones
By Jake Jones
May 1, 2018
Some Republicans are upset with the deputy attorney general for not handing over certain Justice Department documents.
SHOW TRANSCRIPT

Deputy Attorney General Rod Rosenstein said he wasn't fazed by the news Republican lawmakers had drafted articles of impeachment against him.

Let's back up. Members of the House Freedom Caucus, which is made up of some of the chamber's most conservative members, drafted the impeachment articles. They're upset with Rosenstein for not giving them documents related to things like FISA warrants for Trump campaign aide Carter Page and the Hillary Clinton email server investigation.

But Rosenstein said the Justice Department wouldn't be "extorted" by Congress. He also noted lawmakers often clashed with the DOJ.

And to impeach Rosenstein, the Freedom Caucus would have to do a lot more than draft a document.

Members would first have to convince House leaders to advance the impeachment. Then the measure would need a two-thirds vote in the Senate — which seems unlikely, considering nearly half the seats are currently occupied by Democrats.