How Roger Stone Became The GOP's Most Unconventional Operative 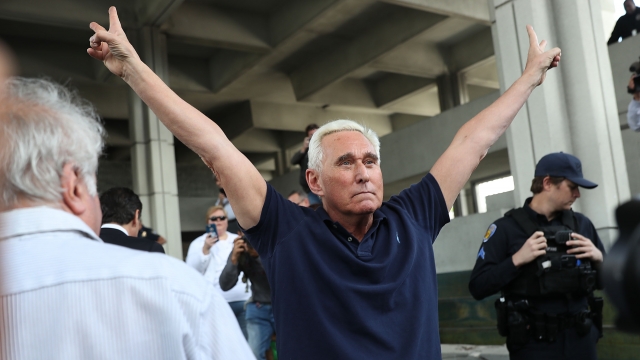 Self-proclaimed “dirty trickster” Roger Stone has a long history in GOP politics earning a reputation for his unconventional and legally questionable tactics.

He began his professional career in 1972, working on Richard Nixon’s re-election campaign.

Congressional hearings into the Watergate scandal in 1973 revealed Stone had hired a GOP operative to infiltrate the campaign of Democratic candidate George McGovern and sabotaged GOP challenger Pete McCloskey’s campaign by making a donation in the name of the Young Socialist Alliance to his campaign.

That news cost him his job for then-senator Bob Dole.

He went on to work on three successful presidential campaigns, helping Ronald Reagan in both of his elections as well as George H. W. Bush in 1988. He was also a senior consultant for Bob Dole’s 1996 White House failed bid against President Bill Clinton.

Stone met Donald Trump while he was working as a lobbyist for his casino business in the 1980s and advised him as his White House ambitions grew.

The GOP operative worked on Trump’s 2000 and 2016 presidential campaigns. He was fired from the latter in 2015.

But Stone continued to support Trump, frequently defending him in the media.

He lauded Wikileak’s release of emails stolen from the Democratic National Committee and Hillary Clinton campaign.

A federal indictment alleges that Stone gave Trump campaign officials information about the Clinton campaign emails before they were published by Wikileaks. Those emails are believed to have been obtained by Russian operatives.

Stone denies any wrongdoing, saying he had no contact with Russian officials.

He has been charged with seven counts, including obstructing a federal proceeding and lying to Congress.