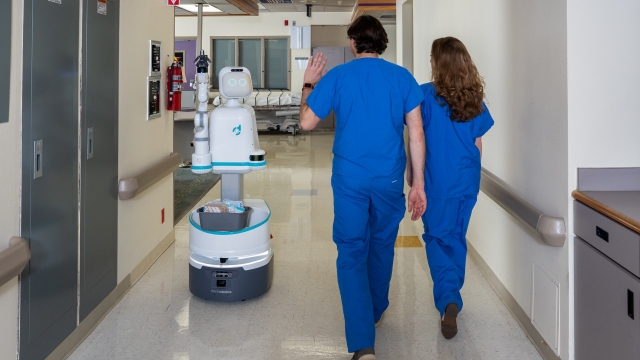 SMS
Robot Use Has Increased During Pandemic
By Cat Sandoval
By Cat Sandoval
August 3, 2020
Study found 203 global instances of robots being used specifically to deal with the coronavirus. What will this increase mean for the future of work?
SHOW TRANSCRIPT

Robots have been around for a while, but experts say robot use and demand has increased during the COVID-19 pandemic. In Austin, Texas, Moxi is a hospital robot that assists nurses with tasks like delivering supplies, lab samples and medication. The five-foot-tall machine can bring clean sheets and remove soiled linens from patient rooms, freeing up nurses to do other tasks. There are also robotic delivery systems, and drones used to inform vulnerable populations. And this fall, White Castle will have a new employee — Flippy — who can flip burgers and cook fries. It will help minimize human interaction in an age of social distancing.

Martin Ford, futurist and author of the book “Rise of the Robots: Technology and the Threat of a Jobless Future" thinks the coronavirus accelerated the push for more robots.

Ford: "Anytime you have an economic downturn, that puts increased pressure on businesses to become more efficient. … Automation on jobs happens during economic downturns. … because it's combined with this pandemic, which puts a lot of pressure for social distancing and an emphasis on hygiene. … and those are factors as well."

Because of the way COVID-19 spreads, robots can be ideal in the workplace. Brain Corp says demand for their robotic cleaning equipment grew 24% in the second quarter of 2020 compared to last year. 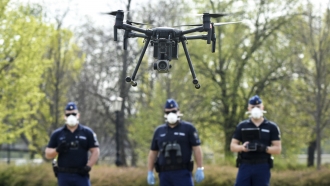 For more than 20 years, professor Robin Murphy has been a pioneer in robots used in disasters like Hurricane Katrina and the Fukushima Daiichi nuclear accident. "We don't know how robots are going to be used because disasters, fortunately, aren't that common. And so we're learning as we go," says Murphy. Murphy and her team analyzed global use of robots from March 27 to July 1. They found 203 instances of robots being used specifically to deal with the coronavirus. More ground robots were used than aerial ones. More robots were used for public safety than in hospitals or for clinical care. Robots were also used in various other sectors too.

Murphy: "So these robots that you think of being used for a pandemic are actually showing economic viability, earning their keep. Every day, like disinfecting hospital rooms where you change out patients."

Murphy thinks robots will stay well beyond the pandemic. But with unemployment rates worse than anytime since the Great Depression, there are legitimate fears that robots will take away people’s jobs — but Murphy insists that’s not the case.

Murphy: "There's so many aspects to the use of robots and the idea of replacing or displacing workers typically in a disaster. Robots are never used to replace a person, a person just faster, better, smarter. You're using it. They're usually smaller or doing things that a person couldn't do or it's just way too unsafe for them to do." 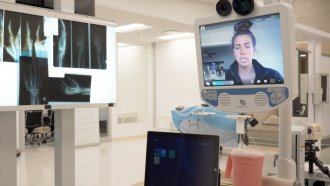 Futurist Ford disagrees. He thinks robots are becoming more adaptable through AI technology and that repetitive, simple jobs will disappear — and with that, job loss and income.

Ford: "We're going to have to figure out how to live and function in a world where there might not be enough work to go around."

While our experts may not agree on the future of work, they do agree that robot use is here to stay.