Rihanna And The Beatles Are Tied For Second Place, But For What? 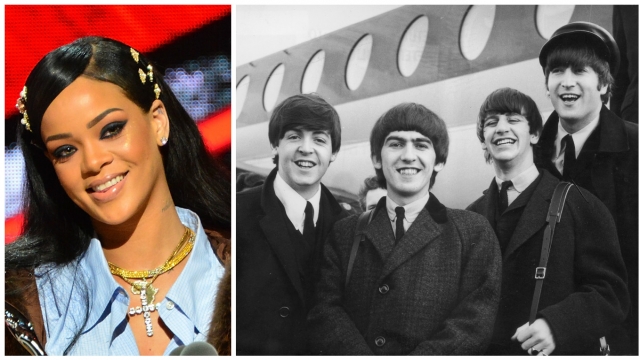 SMS
Rihanna And The Beatles Are Tied For Second Place, But For What?
By Cody LaGrow
By Cody LaGrow
April 14, 2016
The singer's latest single, "Work," ties her with The Beatles for a silver medal for spending 59 weeks atop the Hot 100 chart.
SHOW TRANSCRIPT

You may have no idea what she's saying, but it's probably translated to, "This song is going to put me in the same category as The Beatles."

That's right. Rihanna's "Work" has spent eight consecutive weeks atop the Billboard Hot 100. During the course of her career, that equals 59 weeks she's claimed the top spot for that chart — tying her for second place with none other than The Beatles.

It's a sort of "hello, goodbye, hello," when it comes to records involving Rihanna versus The Beatles. While RiRi threatens their second-place spot for number of weeks at No. 1, The Beatles still crush Rihanna when it comes to No. 1 singles — The Brits have 20 and the Barbadian bombshell only has 14. Really, Rihanna? Only 14?

If RiRi keeps it up, she'll snatch the spot from The Beatles and fall second to, well, someone who sits higher on the list on account of those very high notes.

Mariah Carey takes the crown for weeks spent at No. 1 on the Hot 100 with 79 weeks. She also beats Rihanna for No. 1 singles with 18 of her own. We know you know we like you, Mariah.