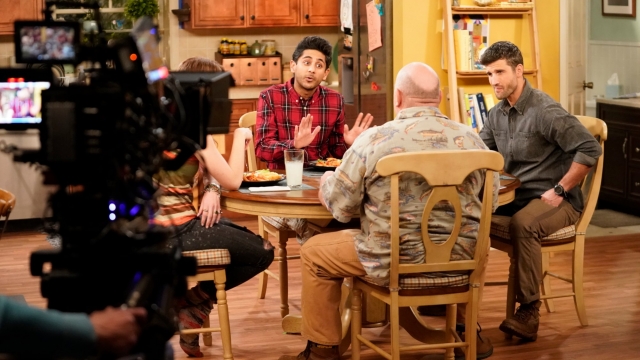 SMS
Reza Aslan Talks Representation And Criticism Of 'United States Of Al'
By Casey Mendoza
By Casey Mendoza
April 29, 2021
A sitcom about a Marine combat veteran and a former Afghan interpreter has sparked controversy.
SHOW TRANSCRIPT

"United States of Al" is a new sitcom from CBS and Chuck Lorre that tells the story of two friends: Riley, a Marine combat veteran, and Al, a former Afghan interpreter starting his new life in America.

Executive producer Reza Aslan: "What we always say is that this show is not about the war in Afghanistan. This show is about what that war did to two people, you know, one who's an Afghan, and one who is an American."

"United States of Al' is especially relevant amid the Biden administration's announcement to remove all troops from Afghanistan by Sept. 11. And while the sitcom doesn't ignore that, executive producer Reza Aslan says the show is more focused on humanizing the politics.

Aslan: "We want to make sure that this character of Al is someone that people in this country — especially in the middle of the country, people who watch CBS at 8:30 at night, people who love sitcoms — get to meet."

Writers on the show include veterans and people of Afghan descent, and the cast includes four Afghan actors — though the character of Al himself is played by Adhir Kalyan, an actor of South Asian descent from South Africa. Critics were quick to point out that casting decision, alongside other ways his character is portrayed.

A critic with Roger Ebert.com wrote that "Al's personality is an array of cliches about the Afghan people and Muslim ideology," while a critic with the AV Club said it was well-intentioned but too dependent on sitcom tropes.

Aslan: "We understood the response from the broader Middle Eastern community to the concept of this show. We get it. … I spent my entire life being misrepresented on television. The entire reason why I went into TV was precisely to change that."

Despite the skepticism and criticism from viewers, Aslan says the rest of the series will dive deeper into Al, his family back home and the real-life fears faced by Afghan interpreters — including those still waiting for their Special Immigrant Visas to move to the United States.

Aslan: "It takes a little while to actually develop characters, to learn about their backstories, to learn about who they are. And I think what I’m really excited about as we get to later episodes is that you’re going to be able to see the true depth, not just of the character, but of the show itself."