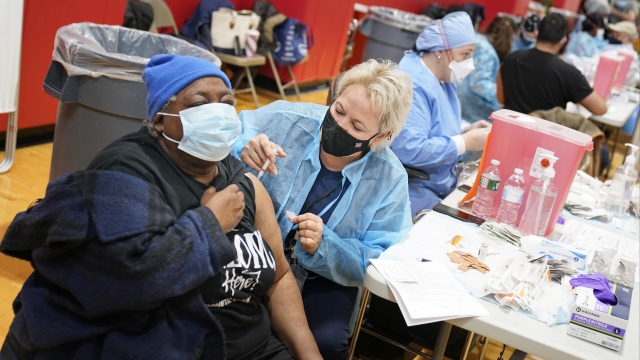 SMS
Restrictions Ease in U.S. As Some States See Rising Numbers
By Alex Arger
By Alex Arger
April 3, 2021
The CDC said fully vaccinated people can travel, but it's not entirely issuing a green light.
SHOW TRANSCRIPT

A return to normalcy appears closer to reality, as U.S. air travel is surging and some of America's biggest cities are reopening. But cases are rising again in parts of the country, including the Northeast and - particularly - in Michigan.

The U.S. has had 30.6 million cases and more than 550,000 deaths from the virus. Dr. Anthony Fauci says the uptick in vaccinations will hinder chances of seeing a fourth wave of the virus.

But Fauci told Newsy's sister station - WXYZ in Detroit - that the state of Michigan may have opened up too early and now is seeing a spike in cases as a possible result. He called for continued vaccinations - and vigilance.

"If we could continue that," Fauci said, "I believe we'll be able to blunt these surges and that's the reason why were of concern that we really want people to not declare victory prematurely and pull back on masking and pull back on avoiding congregate settings because there's the danger of exactly what's happening in Michigan right now."

Meanwhile, the CDC says fully vaccinated people can now enjoy some more freedoms - like getting on an airplane.

TSA air travel numbers have continued to rise for more than 20 days straight. But while the CDC says it's generally safe for vaccinated people to fly, it still isn't recommending that they do so.

"While we believe the fully vaccinated people can travel at low risk to themselves, CDC is not recommending travel at this time due to the rising number of cases," CDC Director, Rochelle Walenski, said.