Paul Ryan's Border Tax Is Dead In The Water 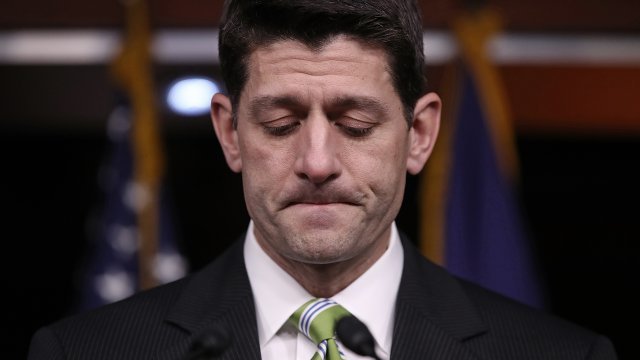 SMS
Paul Ryan's Border Tax Is Dead In The Water

House Speaker Paul Ryan is throwing in the towel on his controversial border adjustment tax proposal.

Ryan and other Republican leaders said in a joint statement Thursday, "We appreciate that there are many unknowns associated with it and have decided to set this policy aside in order to advance tax reform."

It was officially shut down because it just didn't have enough party support. Republicans are trying to overhaul the tax code by the end of this year, and the border tax could have gotten in the way.

The border tax is meant to encourage more production in the U.S.: imports to the U.S. would be taxed, but exports wouldn't. Supporters say it would raise about a trillion dollars over a decade.

But the proposal didn't go over well with companies. They argue it would be too expensive, and they'd have to charge their customers more to offset the cost. Several Republican leaders opposed it as well.

After the party's divisive struggles to try to repeal Obamacare, the GOP is now championing tax reform as its next signature issue. Ryan said last week that when it comes to taxes the party is united. Now, that may be true.

But without the border adjustment tax, Republicans will have to find another way to pay for tax cuts they're promising to give American businesses. There's been no official tax plan released by the party.