DACA Deal Or No Deal? Reports Are Mixed 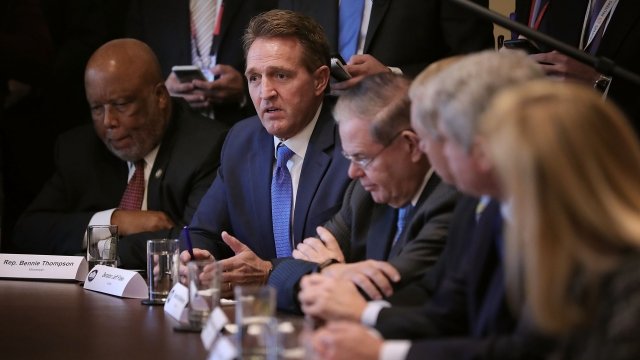 SMS
DACA Deal Or No Deal? Reports Are Mixed
By Casey Mendoza
By Casey Mendoza
January 11, 2018
Sen. Jeff Flake says the deal is "the only game in town," but other lawmakers are skeptical if an agreement was actually reached.
SHOW TRANSCRIPT

The Deferred Action for Childhood Arrivals, or DACA, might have a future — but that depends on whom you ask.

Republican Sen. Jeff Flake said Thursday: "We're at a deal. ... It's the only game in town."

For months, Flake has been negotiating protections for young, undocumented immigrants with Democratic Sen. Dick Durbin and other lawmakers, but many are skeptical if there's really a deal.

Durbin confirmed the bipartisan group had struck a deal, but it's not clear if that deal has broader support in the Senate. Immigration hard-liner Sen. Tom Cotton told outlets, "Of course there's no deal."

The next stage for the alleged deal would be the White House, but officials say the president isn't on board yet.

"The president has been clear about what his priorities are in that process, and we're going to continue working with members of the House and the Senate, Republicans and Democrats to make sure that we get that deal done," said White House press secretary Sarah Sanders.