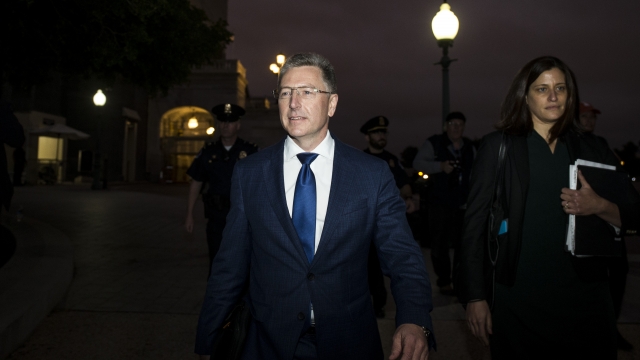 Volker came up in the whistleblower complaint that accused President Trump of trying to get a foreign country to investigate one of his political rivals, former Vice President Joe Biden. The complaint said Volker advised Ukrainian leaders on how to "'navigate' the demands" President Trump had made.

In Volker's prepared remarks, obtained by BuzzFeed News, he laid out five key points he wanted to stress during his testimony. Those were: His efforts were "entirely focused on advancing U.S. foreign policy goals with respect to Ukraine"; he was "concerned that a negative narrative about Ukraine" was reaching President Trump; he didn't know about or participate in an effort to get Ukraine to investigate Biden; he kept his colleagues informed about his actions; and he "strongly supported" providing U.S. security assistance to Ukraine.

President Trump alleges Biden was inappropriately involved in the firing of Ukraine's top prosecutor, who was investigating the Ukrainian company Biden's son was working for at the time.

Even though Volker said he didn't know about efforts to urge Ukraine to investigate Biden, text messages released by House Democrats Thursday night suggest otherwise. The messages involved Volker and touched on the withheld Ukrainian aid and Burisma Holdings, the Ukrainian firm where Biden's son worked.

"First of all, Ambassador Volker — unbelievably knowledgeable about what was going on in Ukraine," Jordan said. "Just a true professional in our diplomatic corps. But not one thing he has said comports with any of the Democrats impeachment narrative. Not one thing."