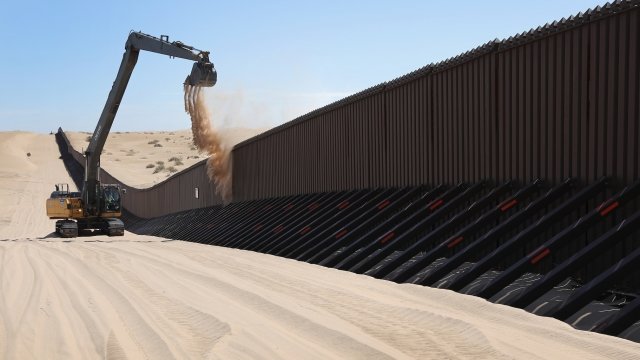 SMS
Report: Trump Wants Military Funding Used On Border Wall
By Jake Jones
By Jake Jones
March 27, 2018
Trump was frustrated a recent funding bill only included $1.6 billion for border security — of which only $641 million can be used to build fences.
SHOW TRANSCRIPT

President Donald Trump is looking into using military funding on his promised border wall with Mexico, according to media reports.

Trump raised the idea in a meeting with House Speaker Paul Ryan, sources told The Washington Post and CNN. Trump was frustrated the recent funding bill only included $1.6 billion for border security — of which only $641 million can be used to build new fencing.

But that bill gave the Pentagon a budget boost, and Trump reportedly wants to reallocate some of it for his border wall. He's called the wall necessary for national security.

Because of the $700 & $716 Billion Dollars gotten to rebuild our Military, many jobs are created and our Military is again rich. Building a great Border Wall, with drugs (poison) and enemy combatants pouring into our Country, is all about National Defense. Build WALL through M!

Trump failed to negotiate a deal with Democrats to secure $25 billion for his border wall in exchange for protections for so-called Dreamers.

But Congress would have to approve whatever funds Trump wants to use, and it doesn't seem likely he could whip up enough votes to make that happen.