Report: Trump Refers To Some Countries As 'Sh*thole' Nations 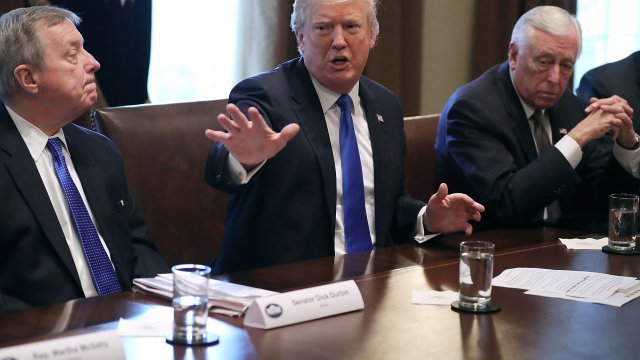 Trump was reportedly responding to a proposal to restore protections for immigrants from Haiti, El Salvador and African countries.

A bipartisan meeting on immigration reform has resulted in controversy for President Donald Trump.

First reported by The Washington Post, Trump allegedly said, "Why are we having all these people from sh*thole countries come here?"

Trump was reportedly responding to a proposal to restore protections for immigrants from Haiti, El Salvador and African countries. The report says lawmakers present were "taken aback."

Following the alleged comments, the White House issued a statement defending the president's stance on immigration. That statement neither confirmed nor denied the comments.

Thursday's report echoes a similar one from The New York Times late last year. Anonymous officials told the Times that Trump, in a June meeting, said people from Haiti "all have AIDS." The White House explicitly denied that report.

Months after that alleged comment, the Trump administration ended temporary protections for Haitians. That program allowed 59,000 Haitians to live and work in the U.S. after a deadly 2010 earthquake.