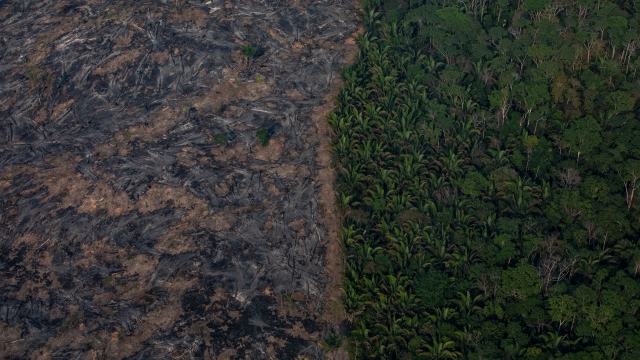 Deforestation in Brazil's Amazon rainforest spiked by 30 percent in a 12-month period ending in July, with destruction blamed on illegal logging, mining and deliberately set fires for land clearing. Those fires only increased in later summer months.

A study by Brazil's National Institute on Space Research revealed that the amount of rainforest toppled totaled nearly 3,800 square miles. To put that in perspective, that's 12 times the size of New York City and all of its boroughs. It's also the highest recorded rate of forest destruction in 11 years.

Climate scientists consider protecting Brazil's rainforest as critical to combating global warming. And Brazil's environmental minister is calling for new measures to sustain the forest and prevent its destruction.

But that is at odds with the public policies of Brazil's president, Jair Bolsonaro. A climate skeptic, Bolsonaro has assailed the space research institute, slashed environmental protection budgets and called for rolling back regulations intended to impede development of the Amazon basin. He said they were slowing Brazil's economic progress.

Bolsonaro also rejected $22 million in aid from G-7 countries to fight the wildfires, after taking umbrage over remarks by French President Emmanuel Macron. The French leader called protecting the rainforest an issue "for the whole planet," telling Bolsonaro: "We cannot allow you to destroy everything."

Bolsonaro demanded an apology for "the insults against me" and said Brazil refused to be treated as a colony.

Brazil's environmental minister said he plans to work with local governments to try and come up with solutions to preserve the Amazon.