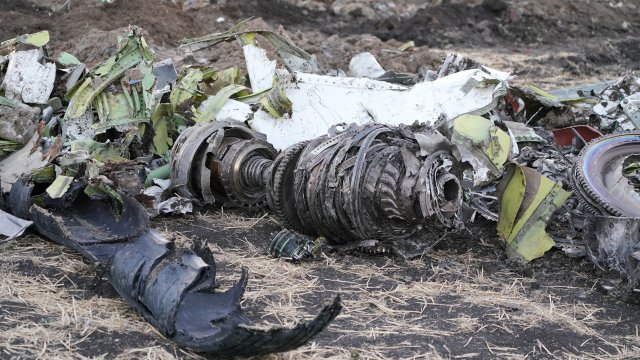 A preliminary report on the Ethiopian Airlines Flight 302 crash shows the pilots followed Boeing's emergency procedures before the plane went down.

Ethiopian Minister of Transport Dagmawit Moges told reporters Thursday the report found the plane, a Boeing 737 MAX 8, had "a valid certificate of air worthiness," and crew members were licensed and qualified to be flying.

Moges said, "The crew performed all the procedures repeatedly provided by the manufacturer but was not able to control the aircraft."

Ethiopian investigators recommend aviation authorities ensure Boeing will review the aircraft flight control system before allowing the planes back in the air.

Ethiopia Airlines said in a statement issued Thursday, "it was very unfortunate [the pilots] could not recover the airplane from the persistence of nose diving."

The crash has been compared to a Lion Air plane crash in October. That plane, also a Boeing 737 MAX 8, crashed into the Java Sea, killing all 189 people on board.

Officials have said they believe the Maneuvering Characteristics Augmentation System, or MCAS, could have caused both crashes. As we've previously reported, the MCAS pulls the plane's nose down automatically if data says the nose's angle is too high. But if the sensor is wrong, the MCAS would force the nose of the plane down anyway — leading to a nosedive.

Boeing 737 MAX airplanes were grounded worldwide in response to the crashes.

The full investigation into the Ethiopian Airlines crash is ongoing and could take up to a year to complete.