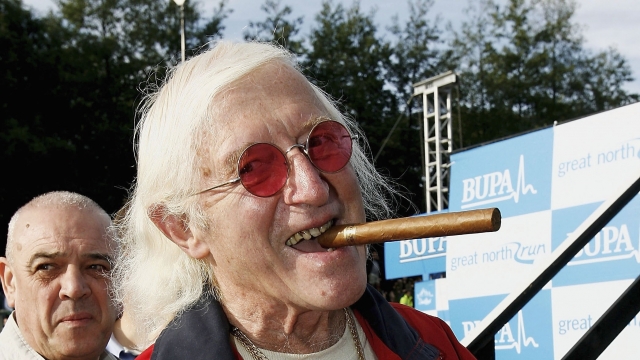 SMS
Report On Jimmy Savile Sexual Assaults Faults BBC's 'Culture Of Fear'
By Matt Picht
By Matt Picht
February 25, 2016
The TV host's many sexual assaults were enabled by a fear of speaking out at the BBC, according to a new report.
SHOW TRANSCRIPT

Jimmy Savile was once a beloved BBC entertainer — until a police investigation uncovered a decades-long string of sexual assaults, some of which were committed against children. Now, a new report is blaming the BBC's culture for failing to stop the attacks.

"Savile was a danger to young people, both girls and boys, opportunistic and shameless," Dame Janet Smith said.

An investigation by Judge Dame Janet Smith lists 72 assaults, including eight rapes, committed by Savile during his tenure at the BBC. Thirty-four of the victims were under 16, the U.K.'s age of consent, and Savile's youngest victim was 8 years old.

Smith also notes Savile, who hosted the BBC music show "Top of the Pops," was aided by the BBC's culture of fear and deference to on-air talent. Reports about Savile's assaults were never escalated or investigated because staff members feared reprisal.

As a result, Smith concludes that senior managers at the BBC were largely unaware of the sexual assaults; a lawyer representing some of Savile's victims slammed that conclusion as an "expensive whitewash" that fails to hold BBC management accountable.

This video includes images from Getty Images and Christine Matthews / CC BY SA 2.0.