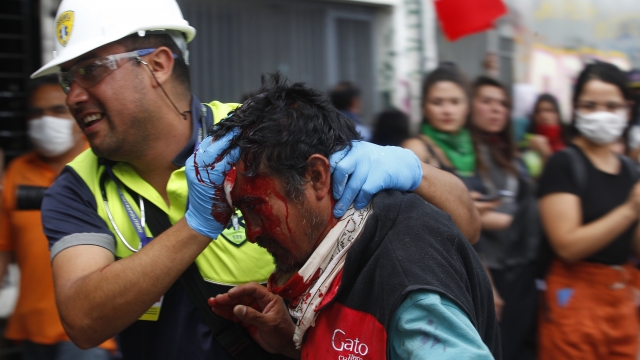 Chile has been gripped by upheaval after demonstrators took to the streets in anger over an increase in subway fares. The demonstrations quickly grew into a broader uprising by hundreds of thousands of Chileans protesting rampant economic inequality.

On Thursday, Amnesty International released this video, which contains graphic images. The group claims the footage documents excessive force, including beatings and shootings of protesters with rubber bullets and live ammunition. It argues that police and military responded to incidents of violence with increasing force and a campaign of human rights abuses intended to crush the movement.

Erika Guevara-Rosas, Amnesty International's director for the Americas, said: “The intention of the Chilean security forces is clear: To injure demonstrators in order to discourage protest, even to the extent of using torture and sexual violence against protesters."

Chile's National Human Rights Institute reported that security forces have killed five people and injured more than 2,300, with gunshots accounting for 1,400 of the injuries. The public prosecutor's office has also taken more than 70 reports of sexual violence.

President Piñera has publicly acknowledged misconduct by security forces. He said in a statement Sunday: "In some cases, protocols were not respected. There was excessive use of force. Abuses or crimes were committed."

Prosecutors are investigating 26 deaths in the unrest, including four people killed by military forces and one by police. Chile's national police reported that 1,600 of its officers have been injured, 105 seriously. None were killed. Reuters reports that 7,000 people have been arrested since protests began in mid-October.