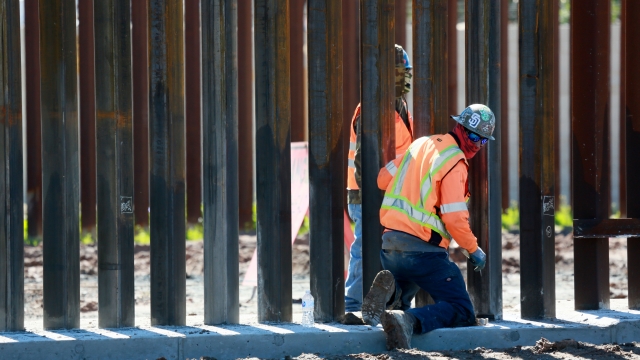 At $18 billion to build, President Trump's border barrier stands to be the world's most expensive wall. Keeping it in shape will raise the price.

President Trump says construction is accelerating on his signature project — a massive barrier along the Mexico border. With a construction price of $18 billion, it stands to be the world's most expensive wall and one of the biggest public works projects in American history.

A report by The Washington Post says those costs may expand exponentially because such a structure may require billions of dollars in annual maintenance.

The Department of Homeland Security spent $274 million on border fence maintenance in 2017. There is no official estimate for maintaining President Trump's anticipated new wall.

But the administration recently spent $1 million just to paint a single mile of border fencing with military labor. Experts interviewed by The Post say maintenance costs will be prohibitive for the 30-foot-tall steel bollard fencing, plus its access roads, lighting, surveillance cameras and other technology.

The border wall is expected to require construction and maintenance of hundreds of storm gates to protect its structural integrity. In 2011, debris and surging flood waters collapsed a 40-foot section of border fencing in the Arizona desert.

The Trump administration has completed construction of 110 miles of new border barriers, adding to 650 miles of previous fencing. It has budgeted $11 billion for 576 miles of new barriers and plans to use an additional $7 billion in defense funding to extend that to 900 miles by 2022.

The president campaigned hard on the wall in 2016 and is doing so again in 2020.

“We’re building the wall. It’s going up. But it’s going up rapidly and very soon we’ll be building about a mile a day and we should be up to over 400 miles by next year, the end of next year and, shortly thereafter, it will be finished. And it's already having a tremendous impact."

The new wall, designed to be far more difficult for unauthorized border crossers to breach than previous versions, is being tested by smugglers who have sawed away some heavy steel posts. And recently a new section of wall, freshly set in concrete, was toppled by high winds in California. Crews rushed to make repairs.