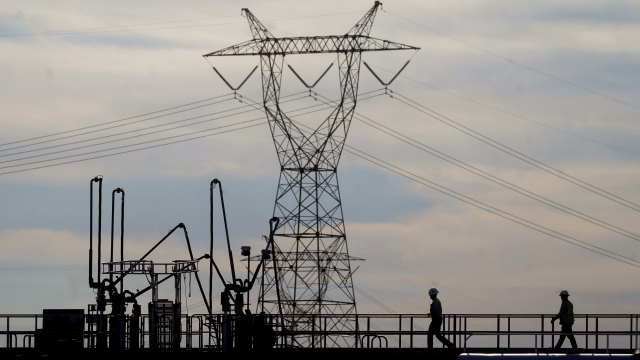 In August, more than 20 million families were behind on their utility bills, mainly due to soaring energy costs.

Higher energy bills are on the way this winter.

A recent report from the National Energy Assistance Directors Association (NEADA) predicts families will pay 17.2% more to heat their homes this winter compared to last year.

The record-breaking heat felt across the U.S. forced Americans to pay more to cool their homes but now that cooler temperatures are approaching Americans will have to pay even more, all because of inflation.

The price of natural gas, the most common way homes are heated, hit prices not seen in more than a decade.

Water and power supplies for tens of millions of American are being threatened as Lake Powell and Lake Mead water levels continue to drop.

"Energy inflation is the leading inflation overall. This is not normal," said Wolfe. "We're seeing numbers for middle income families go higher. And many of those families also are on very tight budgets."

In response, NEADA officials sent a letter to Congress asking for a $5 billion supplemental increase for the low-income home energy assistance program to help cover the cost of heating.

Ian Donnelly, a project manager with a New York state plumbing company, said there are ways to cut down on costs.

"Taking a look at where you might have a window open. Quite often in the summertime basement windows are open to help with ventilation. Well get those closed up. Take a look at some other areas where there might be drafts coming in from windows or doors, get those sealed up," said Donnelly.

Another way to help cut costs is by setting your thermostat between 65 and 70degrees Fahrenheit during the winter, and then lowering that down to 58 degrees when you're away from your home for several hours.

Old heating systems can also increase energy costs, so you'll want to make sure yours is operating efficiently and effectively.

In August, NEADA said more than 20 million families – that's about one out of six American families – were behind on their utility bills, mainly due to soaring energy costs.

The association said those families owe a combined total of about $16 billion in unpaid utility bills.