Rep. Greene Not The Only Lawmaker Sharing Fringe Ideas Online 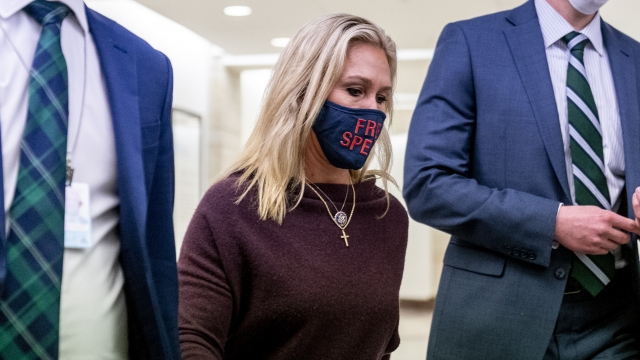 SMS
Rep. Greene Not The Only Lawmaker Sharing Fringe Ideas Online
By Alexandra Miller
By Alexandra Miller
February 4, 2021
Rep. Marjorie Taylor Greene has been booted from her committee assignments, but Newsy found questionable posts from other GOP members.
SHOW TRANSCRIPT

Congresswoman Marjorie Taylor Greene is now removed from her committee assignments after pushing conspiracy theories — like the mass shooting at a Parkland, Florida, high school was a false flag; a plane didn't hit the Pentagon on 9/11; and Jewish space lasers were responsible for the California wildfires. She apologized for the comments ahead of the vote, but it was too little, too late.

Newsy found she is not the only Republican set to serve on the House Education Committee with a history of sharing controversial, sometimes dangerous views.

Freshman Congresswoman Mary Miller of Illinois, speaking at a rally last month, said: "Hitler was right on one thing. He said, 'Whoever has the youth has the future.' Our children are being propagandized." Miller apologized for the comments.

But other members are also sharing fringe ideas online. Utah Republican Burgess Owens has shared links to nearly a dozen articles and statements from InfoWars and Alex Jones, who is known for peddling conspiracy theories about topics ranging from school shootings to Robert Mueller. Other Republicans also named to the Education Committee — Congressmen Madison Cawthorn and Bob Good, and Congresswoman Marrianette Miller-Meeks — shared articles discussing the "deep state" and anti-Semitic conspiracy theories about billionaire George Soros. Good also says mask-wearing is a "hoax" that wouldn't make a significant difference in the fight against COVID, an idea refuted by science and all peer-reviewed data.

Just two of the 11 new Republican members of the House Education Committee voted to certify the 2020 election. Eight others supported the idea of election fraud, even though every secretary of state in the country disputes it. One didn't vote. All these controversies highlight the intense battle underway within the Republican party.

We reached out to the members whose tweets were mentioned for an interview and comment but did not hear back.