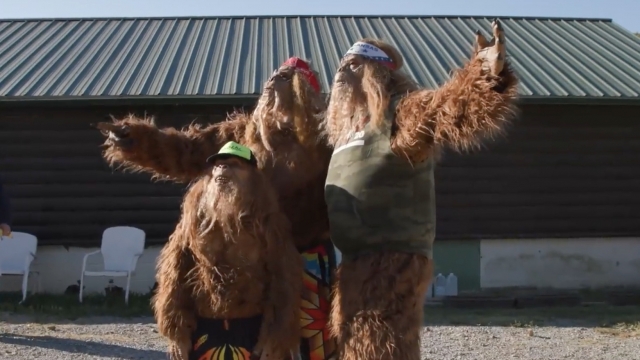 The deep wilderness of southeastern Oklahoma is widely believed to be a Bigfoot hot spot.

Reported sightings of the mythical Sasquatch legend are chillingly common in the area's woods, and no story is too wild to be taken seriously.

The fascination for Bigfoot runs so deep in Honobia, Oklahoma, that every year thousands of enthusiasts gather there to celebrate all things Sasquatch. The festival started 16 years ago and has evolved into one of the country's largest Sasquatch festivities, with some calling it the area's Super Bowl.

It's a two-day event in the mountains that attracts Bigfoot believers, and skeptics, from across the country.

"You might make a call, and you'll be able to hear a call back," attendee Devin Shoonech said. "Except whenever you hear him call back, obviously it's going to be way deeper."

For hardcore believers, the festival's highlight is the daylong conference with renowned Bigfoot scholars.

However, it's around sundown that things get spooky — when everyone is invited to share their encounter stories. Some shared they saw a 12-foot figure or heard a "different" type of howling sound.

Pop Quiz on "In The Loop" asks where humans got the conception most have of aliens, from Hollywood to the world of astrobiology.

All the new Bigfoot knowledge comes handy at night when folks go back to the camping grounds.

The mystique and folklore of Bigfoot world is what makes it so appealing.

According to a 2020 survey, 11% of Americans believe Sasquatch is real. Whether or not a person believes in the Bigfoot legend, its economic footprint in that part of the Sooner State is hard to miss.

In Hochatown, about 40 minutes away from the festival, store owner Janet Cress says business is booming, in large part thanks to the hundreds of Bigfoot items she sells.

"He comes by every night," Cress said. "He leaves us little locks of hair. We put them in a bottle, and we sell Bigfoot hair."

Back at the festival, the final day starts with a 5K race in the mountains, with a Bigfoot sighting at the finish line.

All jokes aside, Sasquatch believers say the festival is a safe space to learn from one another without being ridiculed.

There, they can fully enjoy their hobby and celebrate nature and those who live in its midst.

Why do we shake hands in the first place?