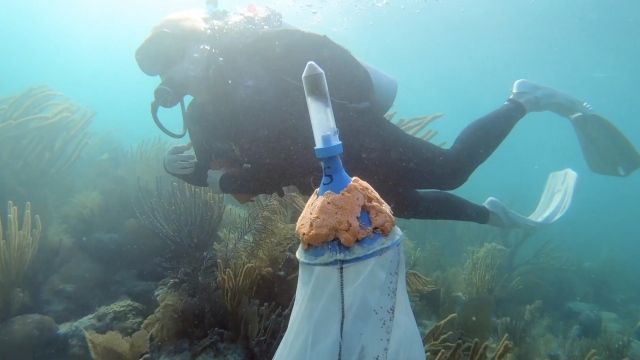 On a breezy night in Miami, scientists start their day at work. As one team heads out on water, the other team stays dry, on land.

Both groups hope to witness a rare and intricate natural event — coral spawning.

That's the process when colonies of coral reefs reproduce by simultaneously releasing rice-sized eggs and sperm. It's an underwater blizzard of birth that scientists say can help protect Florida's coastline.

"Because they're offshore and because they're relatively close to shore and just under the surface, they actually act as very effective wave breaks," said marine biology and ecology professor Andrew Baker. "Breaking waves offshore before they hit the coastline reduces the amount of sea penetration into coastal areas and reduces the amount of flooding."

Studies have found healthy coral reefs can reduce as much as 95% of a wave's energy.

"This skeleton is rigid and it's very hard, very dense, and it acts as a very effective breaker of waves. It's like a seawall under the ocean," Baker said. "This is actually tremendously heavy. This grows much more slowly than the staghorn corals, which are relatively light, and it's much denser. But it's an even more effective wave break."

Corals like these can prevent more than $5.3 billion in potential flood damage for U.S. property owners, according to a 2021 study published in the journal Nature Sustainability.

It's a natural defense line, but it's in desperate need of reinforcement.

Global warming is the main existential threat to coral reefs. Warming waters causes coral bleaching, a process where corals turn white and exist on the brink of death.

Nearly 90% of Florida's coral reef has been decimated over the last 40 years, according to NOAA, for these reasons.

Baker works with a team of Ph.D. candidates at the University of Miami's Rosenstiel School of Marine and Atmospheric Science. They are responding to nature's call for backup by selectively breeding corals off of Florida and Caribbean coasts to not only regrow coral reefs, but create more resilient coral.

The process is basically freezing the eggs and sperm for in vitro fertilization.

"The sperm — we can't freeze the egg, it's a little too complex for us, but we're thinking about it. But we are able to freeze sperm," student Liv Williamson said. "And yes, in vitro fertilization is kind of a fertility clinic for corals with the goal of helping offspring be created that can survive."

It's a slow process. It can take five to 10 years for certain coral species to become an adult colony, which is why the Rosenstiel School is working on another line of defense.

He's working on a seahive, which is a shoreline protection system. It's hexagonal, hollow and hospitable enough for corals and mangroves to grow on.

"It works as a speed bump when it's submerged and it can work as let's say an airbag when you're by the shore. So we absorb basically the shock," Rhode-Barbarigos said.

He and his team of students are testing the structure in a massive wind and wave simulator that can reach Category 5 hurricane conditions.

It's successfully reduced wave energy in the lab, but Barbarigos is ready to test it in the field.

There are three seahive projects that are currently under permitting, one of which is going to be off the coast of Miami Beach. It's something you won't be able to see, but what you can see are homes that are not too far away. And that's the point. These seahive structures are meant to break the wave energy and prevent the water from coming too close to homes.

But there are limits.

The damage was costly and it took him four years to finish repairing the home.

So even if the innovations are Band-Aids, Farinas says any attempt to reduce the damage is worth it.

As it turns out, a solution to preserving the land may lie in what's out in the sea.