Reform Or Defund Police? Activists, Lawmakers Split On Next Steps 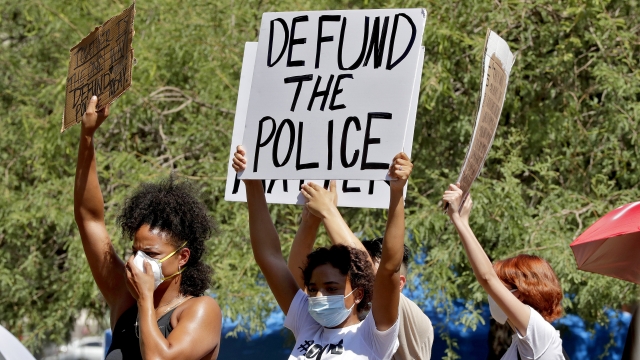 Protesters have demanded a total overhaul of the nation's police forces, and elected officials are backing reform.

It was Martin's death in 2012 that catalyzed the Black Lives Matter movement, and Brown's in 2014 that raised its profile, inspiring a nationwide debate over racial inequality and police brutality.

But despite those reforms, the number of people killed by the police has remained steady — about 1,000 every year from 2013-2019. In 99% of cases, the officer wasn't charged. And research now suggests efforts to increase awareness of bias may even have been counterproductive.

"There's this notion that what we'll call 'Sensitivity Training' programs made officers stereotype more because what they learned in their training was, 'Black people are like this, Asian people are like this, Latinos are like this,'" said Delores Jones-Brown, a professor of law, police science and criminal justice administration at John Jay College of Criminal Justice.

Frustrated and impatient with the pace of change, some activists and progressive elected officials are now calling for a complete transformation of American policing.

"It's systems that keep rotating and not evolving in the truth of change," said one Black Lives Matter activist.

"We are so far beyond reform because that, to me, implies that at some prior period in our history that this policing function or apparatus operated effectively relative to its Black community, and that has never been the case," said Ronnie A. Dunn, associate professor of Urban Studies at Cleveland State University.

According to some experts, the key to understanding the conflict between communities of color and law enforcement is a more honest understanding of history.

"There is this endemic belief that Blacks are more dangerous, that they're more criminal, and if police aren't there to control and contain them then we will evolve into chaos," said Jones-Brown. "That goes back to the notion of African slavery and the 100 years after African slavery of segregation, Jim Crow laws and the laws being applied in a way that made us all become conditioned to seeing crime in blackface."

The death of George Floyd has led to calls to "defund the police." Activists say elected officials have routinely cut funds for education, housing, youth and social programs while police budgets have ballooned. They say to deal with these issues, communities need social workers and educators, not police officers. They suggest moving funds out of police departments into community needs.

In Washington, the movement has gained support among the leftist wing of the Democratic Party.

"I will never stop saying not only do we need to disinvest from police, but we need to completely dismantle the Minneapolis Police Department," said Rep. Ilhan Omar at an "anti-enforcement" rally in Minneapolis.

But top Democrats are not on board.

"I can't imagine that happening in a federal way," said Rep. Karen Bass, chair of the Congressional Black Caucus, of defunding police departments.

As the movement grapples with a question — defund or reform — some experts say the idea of "defund" is more than what some lawmakers see as a progressive pipe dream.

"The thing is not about number. It's about what kind of police force you want to have," said Jones-Brown.

The choice communities are facing now: Whether to stick with a system of policing that has not lived up to the promise of the reforms enacted after the death of Michael Brown or hear the demands of protesters and try a different direction.

"I think it is naive for this evolution of policing to start with, 'Let's try to figure out how many police we need.' Because if we redirect the funds that have been going to policing into those other areas — food, housing, education, jobs, youth services, recreation and treatment for mental health and substance abuse — the need for police to control and contain people should go down," said Jones-Brown.