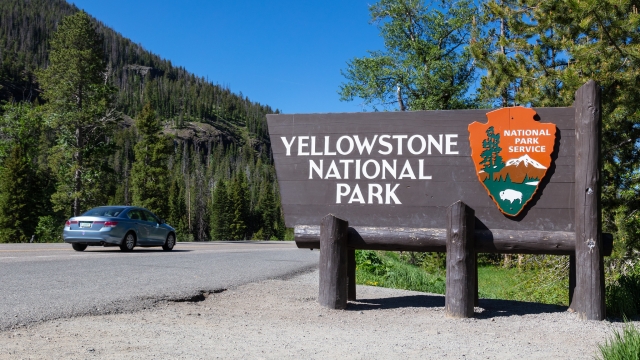 From its geysers to wildlife and geothermal features, the world's first national park has a lot to show off on its 150th birthday.

"Yellowstone in its own right is a sacred place because of the expressions of the earth moving and bubbling up coming out," Scott Frazier, Project Indigenous director, said.

But the land's significance goes back much further than 150 years.

For 10,000 years before it became a national park, the land now known as Yellowstone was a place Native Americans hunted, fished, gathered plants and used thermal waters for religious purposes and medicine.

"We also want to use this anniversary to do a better job of fully recognizing many American Indian nations that lived in in this area for thousands of years prior to Yellowstone becoming a park," Cameron Sholly, superintendent of Yellowstone National Park, said.

"People are drawn to this because it's a sacred place," Frazier said."It speaks to the people's heart, to their soul."

Earlier this year, the park transferred 28 bison to the Assiniboine and Sioux tribal nations at Fort Peck.

"It's a very inspiring for all of us as we work together with tribes and with other partners to move live bison from Yellowstone back to the ancestral tribal lands," Sholly said.

There are plans for multiple tribal nations to install a more authentic teepee village near the iconic Roosevelt Arch, where one already stands.

The park was established by an Act of Congress in 1872 before there was even a park service.

It looked a lot different.

"We didn't get it right in many ways," Sholly said. "Our government policies were generally to rid the park of predators, and we did that we did it at mass we extirpated wolves we extirpated cougars we decreased the population of bears."

In the 1960s, rangers fed bears out of garbage dumps so visitors could see them.

"I'd say for the first 80 or 90 years of Yellowstone's existence, we did not set the best examples from a wildlife management," Sholly said. "I think we've done a good job of correcting many of the mistakes of the past, relating to the management of this ecosystem that's not just here in Yellowstone, but it's in areas in other parks across the country."

And just like the geysers the park is known for, visitation is erupting.

"I think we have a very good strategy that really does a good job of focusing on actual impacts of visitors on the resources of this park impacts on our operations and staffing and infrastructure," Sholly said.

The increase means an increase in misbehavior, with social media sites popping up to document it.

"Often when bad behavior happens other see it, and if there's no consequences they may try it too," Rick Hoeninghausen, with Yellowstone National Park Lodges, said. "Probably makes sense for us to spend a lot of that time, focusing on things like communicating and reinforcing responsibility when visiting."

The park faces other new threats.

"Climate change, obviously, is probably the single biggest threat to Yellowstone and our ability to manage species and help them adapt and understand," Sholly said.

Going forward, the park will continue to look for ways to be more sustainable, by replacing incandescent light bulbs with LEDs, adding more electric vehicle charging stations and reducing the overall environmental footprint to keep this place magical.