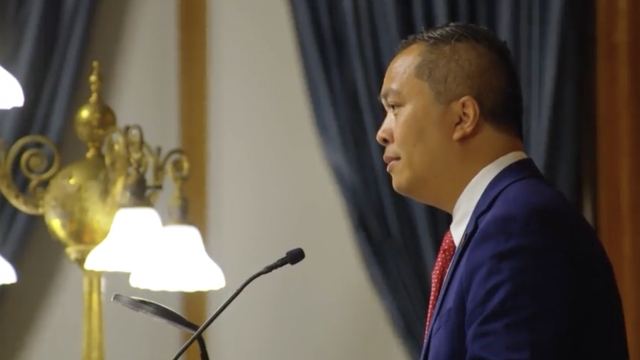 Lowell, Massachusetts, used new districts in its 2021 elections, changing the face of its politics and bringing representation to leadership.

Sokhary Chau came to the U.S. as a refugee when he was 9 years old. Now he's the nation's first Cambodian-American mayor, leading the city of Lowell, Massachusetts, about 30 miles north of Boston.

Chau has been on the job for nine months, well aware that he looks nothing like his predecessors.

"Hopefully, I'm the first but not the last," Chau said.

Lowell — population 115,000 — is a city with deep immigration roots. It has the nation's second-largest Cambodian community, and nearly 50% of its residents identify as people of color. But until very recently, nearly all its elected officials had been White.

That changed dramatically in January when Chau took office together with two other Cambodian-American council members and the city's first Black representative.

It all happened thanks to a new map. Used for the first time in the city's 2021 elections, new districts changed the face of Lowell's politics. But, it didn't happen without a fight.

Civil rights attorney Oren Sellstrom sued Lowell in 2017 on behalf of a group of Latino and Asian American residents. He argued that the city was violating his clients' voting rights by electing every single official on a citywide basis.

"There was a majority White voting bloc that was diluting the vote of communities of color, running the table in every election, not just getting 51% of the seats, but 100% of the seats 100% of the time," Sellstrom said.

The Supreme Court is set to decide if Alabama violated the Voting Rights Act when it redrew Congressional maps.

After fighting in court for two years, Lowell agreed to divide the city into eight new districts — two of them having a majority of non-White voters. Overnight, residents whose voices had been ignored for decades got multiple seats at the table.

"Voting rights are precious and when they are protected, it creates a stronger community for everyone," Sellstrom said.

Fleeing the genocidal Khmer Rouge regime, Cambodian refugees started arriving in Lowell in the early 1980s to find working-class jobs. Most came with war trauma, no knowledge of English and no money.

"I was involved with some of our older leaders back in the '90s," said Sothea Chiemruom with the Cambodian Mutual Assistance Association. "It was hardest to try to talk to people and try to explain to people what it means to be a citizen, what it means to participate."

"There are other communities also within the city of Lowell that are going through what we have been going through," Chiemruom said.

Back at city hall, Chau says sometimes he still feels out of place, but he draws strength from his mother and his late father.

"When my father was a captain in the army, he was one of the first to be taken to be killed," Chau said. "My mother was left with seven children. Her perseverance kept us alive during the Khmer Rouge."

His ultimate message to the people of Lowell, specifically to immigrants who were not represented before, is to persevere.

"I wasn't born here, came here with nothing," Chau said. "That resonates with other immigrant groups from all over the world as well. I hope that I would serve as a role model to anyone else that want to serve in other towns, cities or states in the country."