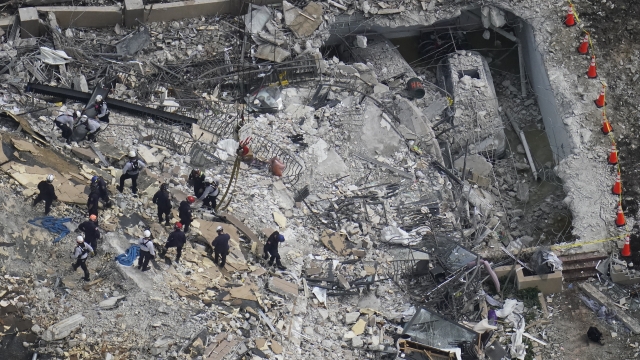 Officials say there's "no chance of life" in the rubble.

Crews working on the site of the collapsed condo building in Florida hours into what is now officially a recovery effort.

The shift comes after authorities concluded there was "no chance of life" in the rubble.

A solemn moment of silence marked the official end of a two-week search for survivors with crews working around the clock in the hopes of discovering signs of life.

It's a moment that so many family members have dreaded — finally coming to terms with the fact they'll never see their loved ones again.

On a fence that's turned into a memorial wall firefighters hang a banner that says "Miami-Dade Fire Rescue mourns with you."

More bodies were recovered yesterday bringing the death toll to 60. More than 80 people are still unaccounted for.