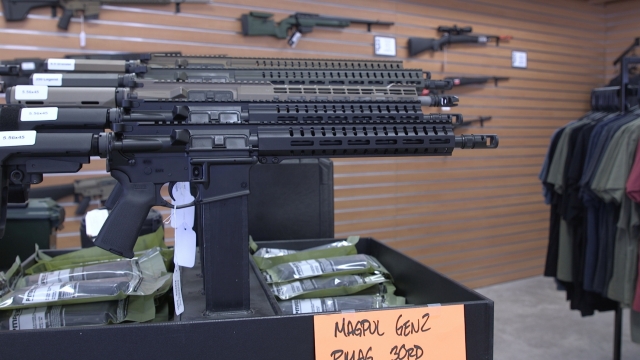 "When you come to us and say, I want to take your class, that's huge," Burke said. "You know, you're saying I trust you."

"There have been so many things going on in the country and you can’t always rely on the police to be there for you," Nathaniel Diaz, who enrolled in Burke's class, said.

Demand for firearms usually spike after major events, like mass shootings, or during election years.

But 2020 was unprecedented. According to firearm sales estimates from The Trace, more than 44 million guns were sold in 2020, the highest on record since data collection started in the beginning of the year 2000.

Because of the increase in new gun buyers in the market, ammo manufacturers have had to ramp up production to meet the high demand — causing an ammo shortage.

"You also have a little bit of the toilet paper effect that we saw at the beginning of the pandemic," Oliva said. "When you walk into that retailer and you see that the shelves are starting to get bare and you start to become concerned. ... So you start to grab a couple of boxes here and there."

"You can see I have a single shelf of ammo left," Megan O'Day, the manager at Black Rifle in Boonville, Missouri, said. "Normally, at least two, if not three of these are full of ammo."

Large ammo companies have said they're trying their hardest to keep up with demand.

O'Day told Newsy: "We get a lot of people coming in and seeing how low we are on product and flat out ask like, 'are you guys gonna be able to stay in business?' Like, 'I appreciate the concern, but, yes, that's my goal.'"

As for Burke's class, attendees are asked to bring their own ammunition in order to participate.

Since October, he said, about a dozen people said they couldn't find ammo for the class.

"There’s several places around here and you just check them on a daily basis," Missy Belshe said. "You’re going to find it just might take a minute. Maybe just schedule the class at least a few weeks out so you have some time to find some ammo but I don’t think it would be a problem."