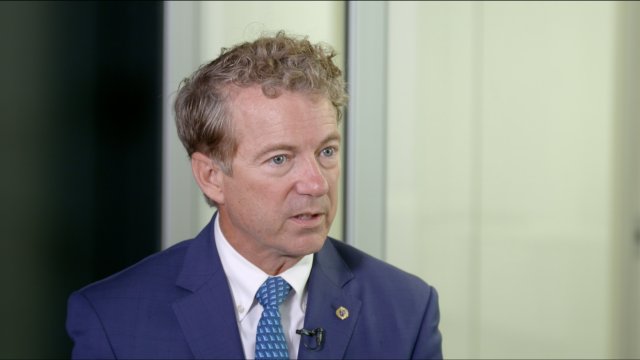 Republican Sen. Rand Paul is hoping to remind Americans of what he calls the haunting legacy of socialism as high-profile politicians and the public show more willingness to embrace it.

"I don't think we teach history," Paul said. "Mostly people have no idea who Mao is. They have no idea who Pol Pot was. They might have a vague notion of Castro. And they all think Che Guevara was like a rock star or something, you know?"

"And so this history needs to be told again. But also, the big thing they're doing now is they're saying, oh, we're not stall and we're not for that. we're for democratic socialism. and we need to go into that as well."

Paul's new book — "The Case Against Socialism" — is filled with examples of authoritarian leaders who embraced forms of socialism: from China's Mao Zedong to Venezuela's current ruler Nicolas Maduro.

Each, he says, serve as cautionary tales at a time when a growing number of Americans hold favorable views of socialism.

A Pew poll this year found 42% or adults had a somewhat or very positive impression of socialism. that's up from just 29% in 2010. And support is highest among adults under 30.Most of those who like socialism say it creates a more fair and equitable economy.

That messaging has been at the cornerstone of Democratic Socialist Bernie Sanders' presidential campaign -- even using it to separate himself from 2020 rival Elizabeth Warren -- who has overtaken him in the polls.

"Elizabeth, I think, as you know, has said that she is a capitalist through her bones. I’m not," Sanders told ABC News.

Still --  though support for socialism may be growing -- Pew found 55% of the country still views it unfavorably.

"I don't think that's much different from Bernie Sanders or Elizabeth Warren. I think they're basically the same thing. I think she's smarter because she knows that the public perception, while may be changing among the youth, to be more accepting of socialism. I think she realizes the vast majority of adults that people have read any history really don't have a good perception of socialism."