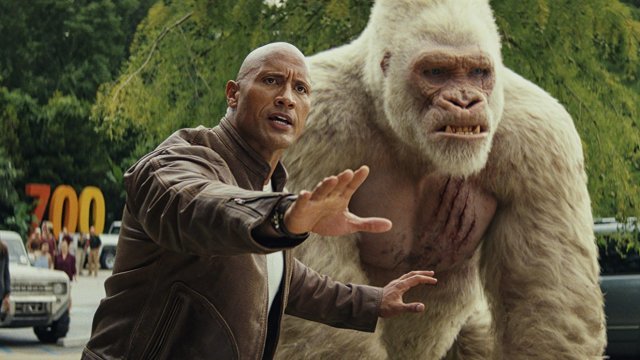 SMS
'Rampage' Barely Takes The Top Box-Office Spot On Crowded Weekend
By Jamal Andress
By Jamal Andress
April 15, 2018
"Rampage" has managed to reach a critical milestone for video game adaptation films — not a particularly impressive one, but a milestone nonetheless.
SHOW TRANSCRIPT

Taking the top spot this weekend in a photo finish is "Rampage," bringing in an estimated $34.5 million. "Rampage" is your typical monster movie. Except it's based on a video game. And they couldn't pick which monster they wanted.

Unfortunately, multiple CGI monsters don't come cheap. "Rampage" cost more than $120 million to make, so Dwayne Johnson and company are depending on a solid showing overseas.

And they've gotten that so far — China brought in $55 million by itself, and the worldwide total for the weekend is about $149 million.

As for the film itself, "Rampage" has managed to reach a critical milestone — not a particularly impressive one, but a milestone nonetheless.

By getting a 50 percent on the Tomatometer, "Rampage" has scooted past "Tomb Raider" to be the best-reviewed video game adaptation film on Rotten Tomatoes.

Unfortunately, that still doesn't get this film into the "certified fresh" club, but progress is being made. Who knows? Maybe "Detective Pikachu" will get that elusive tomato. But probably not.

Taking the No. 2 spot this weekend is the movie you should have seen. "A Quiet Place" brought in nearly $33 million in its second week out, pushing its worldwide total past $150 million.

Taking the third and final spot this week is "Truth or Dare," bringing in an estimated $19 million and following the Blumhouse Productions formula to a "T." With a $5 million budget, "Truth or Dare" is performing better than expected, even with some less-than-enthusiastic reviews.

Well, not a ringing endorsement, but considering the 15 percent Rotten Tomatoes score, it could be worse.

As for next week, Amy Schumer gives a master class in self-confidence in a way only she can.