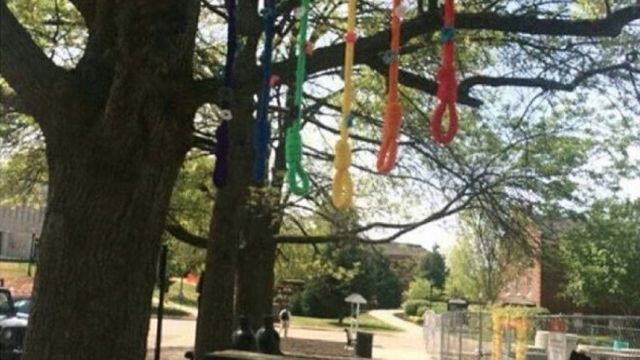 SMS
Rainbow Nooses Removed From Tree At Austin Peay State University
By Jamal Andress
By Jamal Andress
April 19, 2016
The six nooses on display were part of a class project approved by an instructor, according to a student who spoke with a local outlet.
SHOW TRANSCRIPT

Officials at Austin Peay State University are investigating the six rainbow-colored nooses hung on the university's campus in Clarksville, Tennessee, on Monday.

The nooses were removed after school officials received complaints from students who saw the display.

The university's president called the incident "deeply disturbing" and added "regardless of the intent, the display has no place on our campus."

The "regardless of the intent" part is important because according to several outlets, an APSU student said "the project concepts and locations were approved in advance by the instructor" and were for class.

Similar incidents have occurred at other southern college campuses. Recently, two former University of Mississippi students pleaded guilty to tying a noose and confederate flag around the neck of a statue of James Meredith.

Meredith was the first black student to attend Ole Miss.

No word yet on who's involved with the rainbow nooses on APSU's campus.

This video includes clips from Austin Peay State University and images from the Library of Congress.