Rain Is Helping Keep McKinney Fire Down, But Hotter Days Ahead Won't 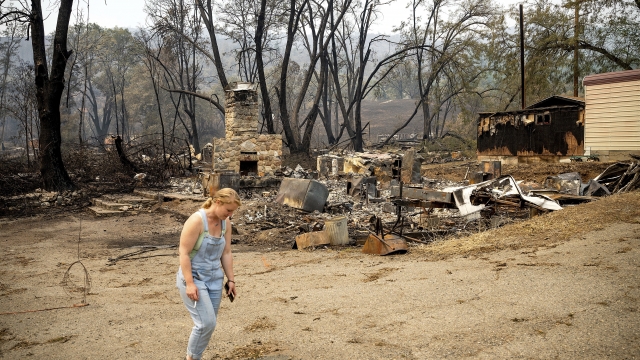 SMS
Rain Is Helping Keep McKinney Fire Down, But Hotter Days Ahead Won't
By James Packard
By James Packard
August 3, 2022
Rain is helping keep the growth of the McKinney fire down, but hotter, drier days ahead is expected to cause increased activity in the blaze.

In northern California, growing fires have given way to dangerous mudslides, as heavy rains prompt flooding in evacuation zones.

"This area of the fire, the east side, some areas got up to three inches of rain in just over an hour," said Dennis Burns, a fire behavior analyst.

They're pouring on some of the fire while crews backed off firefighting.

"We actually had to have some crews shelter in place until they can get out today and assess the roads," Burns said.

The rains only helped some of the burn area, and forecasters expect temperatures to increase and rainfall to decrease in the days ahead.

"I've never seen such a wasteland," said Bill Simms, who lost his home. "There was no birds. There's nothing, nothing."

He and other residents are now learning of destroyed homes and lost neighbors and friends.

"I didn't think I'd get emotional," Simms said. "I don't get emotional about stuff, but when you hear my next-door neighbors died, Chuck and his wife. They couldn't get out because they always locked their gate, and he couldn't get out. Then my other neighbor died, Uncle Johnny, and this is within a half a mile. They both died. That gets a little emotional when you see it going down there, because I care about people."

The McKinney Fire is one of the largest of 62 large fires burning across 15 states, forcing evacuations across the west.

"I just try to take it in stride and make the best of it and figure it could be worse," said Miki Peterson, a Montana evacuee, said.

The Elmo 2 fire in Montana is burning more than 16,000 acres and threatening nearby communities.

The National Interagency Fire Center reports this fire season has the most active fires to this point in the year of any season in the last decade, and it’s burned more acres to this point than any season since 2015. Scientists say climate change has made the West warmer and drier and expect wildfires to be more frequent and destructive.

"I'm sad," sad Harlene Schwander, who lost her home in a wildfire. "Everybody says it was just stuff, but it was all I had. I've been single for a long time, and I just I'm going to have to cope."