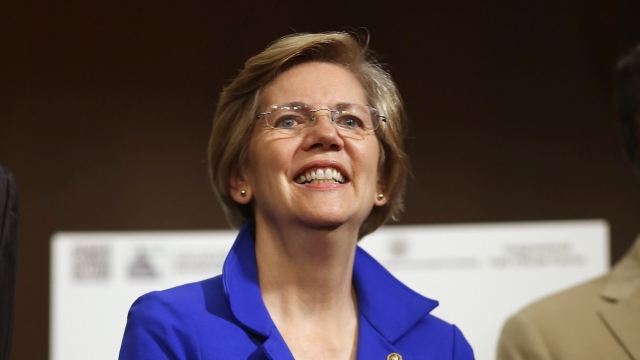 During a campaign stop in Bangor, Maine, Donald Trump sent out conservative talk radio host Howie Carr to warm up the crowd for him.

At one point, Carr decided to riff on one of the Trump campaign's most outspoken opponents, progressive Sen. Elizabeth Warren.

Carr asked the crowd, "You know Elizabeth Warren, right?" He then imitated a war whoop.

That was a reference to Warren's alleged Native American heritage. The Massachusetts senator claims to be 1/32 Cherokee; that claim hasn't been substantiated, and she's not a member of a tribal group.

Warren faced increased scrutiny about her heritage during her 2012 campaign for Senate, when her Republican opponent Scott Brown accused Warren of professionally benefiting from her heritage.

Warren was touted as a minority faculty member during her tenure at Harvard Law School, but both the school and Warren deny her claimed heritage played a role in her hiring.

Brown's campaign wasn't able to make the accusation stick, and the mini-controversy was buried after Warren's election victory — until Trump resurrected it again.

Responding to a reporter's question about Warren, Trump said: "Who's that? The Indian? You mean the Indian?"

Trump's hasn't been afraid to bring Warren's heritage into their ongoing mud-slinging battle. He's referred to her as "Pocahontas" several times during campaign speeches, and on Twitter he accused her of lying about her heritage.

It's worth noting that Brown's supporters also mocked Warren with war whoops and tomahawk gestures in 2012. Then, the Brown campaign had to distance itself from those actions; so far, Trump's campaign hasn't indicated it will do the same.

This video includes images from Getty Images and clips from C-SPAN and ABC. Music provided courtesy of APM Music.