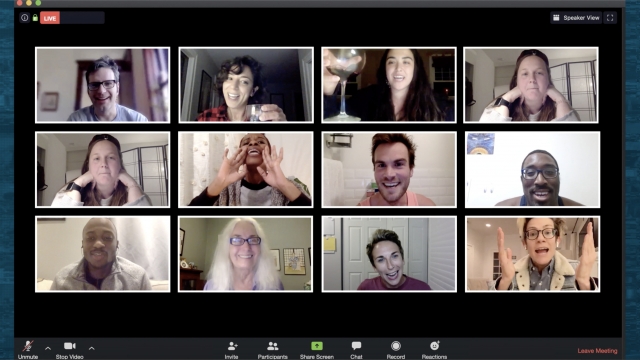 Let's face it — working from home is one thing. But playing from home? Yeah, that requires a little more imagination.

At the same time bros are beer pong-ing via broadband, there's a drag queen lip syncing for her life on a livestream. As the "Houseparty" evolves, so is how we're finding a way to laugh.

During a pandemic, we're putting the social in social distance.

A new Newsy/Ipsos survey reveals video chat use has increased double digits since last month. Currently, 35% of respondents say they've video chatted with friends or family more often than normal over the past week. In March, 20% said the same.

FaceTime and Zoom are the most popular platforms, used by 45% and 42% of respondents, respectively.

The increase is parallel with loneliness. More than half of respondents, 55%, say they feel lonelier since social distancing began. The same number say they actually feel like part of a community when they see their friends or family virtually.

"What do you say to that person who is maybe doubting how good a Zoom experience can make you feel?" Newsy's Cody LaGrow asked Alex Kumin, a host of a newly formed comedy open mic night online.

Kumin is a stand-up comedian based in Chicago. Pre-coronavirus, she hosted an open mic night at Cole's Bar, which is owned by Cole Brice.

Cole's, a notorious dive bar in the Windy City, has been the home to the weekly comedy event for over a decade. Brice said he never thought the bar would need a digital platform.

Brice, Kumin and additional host Carly Kane, set out out to recreate the dive bar digitally. The new space to do it: Zoom. Then, they added comedians, folded in a few audience members, and sprinkled in the secret ingredient that made their spot special. For Cole's, that's the house band.

A piano played-in Kumin, and she began explaining the rules of the night: BYOB, mute your microphone and jazz hands will substitute for laughter.

Kumin said the night felt similar to your average night at Cole's.

"Comedians can be just as annoying online asking about a spot as they can be in real life. Knew that was coming. We did have hecklers!" shouted Kumin.

If you're unfamiliar with the concept of "zoom bombing," it's when a third-party hijacks the virtual hangout and controls what is being shared on the platform. This happened twice to Kumin and Kane, where pornographic images interrupted a national comedy event attended by nearly 300 people.

Professionally, Kumin and Kane persisted, claiming Cole's has prepared them for both the exciting and explicit. Their focus while living through a pandemic: embracing the awkward.

"It's a new experience. How am I going to tell jokes without hearing laughter? How long do I pause after joke?" asked Kumin.

"I have to talk about this the way I am accustomed to coping with things —through humor. And, I think a lot of the comics did a great job at filtering their experience through their unique perspective," added Kumin.

From coast to coast, hundreds showed up to share and listen to stories of self-isolation.

"I feel like I'm becoming a stay-at-home white mom," said Chicago comedian Danny Sellers. "The other day, I shotgunned a White Claw and did all the dishes."

Los Angeles comedian Cameron Esposito is quarantined with her girlfriend who contracted the virus. She joked, "The doctor put her face in her hands. I don't know if you've ever seen a coronavirus-diagnosing doctor touch her own face because of the lifestyle you lead."

And, from the American epicenter of the pandemic, comedian Tommy McNamara shared his perspective from New York City.

"If you're really stressed at home, you can go take a walk at a crowded grocery store," laughed McNamara.

Kumin went on to explain how the best comedy is the most genuine and should include people's vulnerabilities.

"It really fosters a connection which I think a lot of people are missing right now. Actual physical human connection has been off the table for four weeks now," said Kumin.

"I find it a little bit weird as much as I write and talk about unplugging technologically, that I've switched to doing therapy entirely through a computer," explained Gillihan, who is based outside Philadelphia. "But I do find that these screens can be a real medium for connection. Actual connection."

Gillihan wrote a book about managing anxiety, panic and worry. He knows people may be wary about new forms of communication.

If you are feeling lonely, Gillihan offered a seemingly obvious solution.

"It kind of goes without saying, but connect with others as much as you can. I think there can be a tendency to let go of possible ways of connecting if we can't do it our preferred way. Then, we might say, 'I don't really feel like doing that new Zoom call, or texting, or whatever.' But, I think we can keep as much as contact as is available. Keep a schedule. Keep it moderate. Keep it modest. And, stay connected to people who lift you up," offered Gillihan.

Whether it's DJ D-Nice's Club Quarantine on Instagram Live, a Skype watch party or an open mic night on Zoom, do it. But, do it for you.

Kumin shared the bar planned to go virtual for the foreseeable future. She explained how it's a necessity for a community of artists whose income took a hit since large gatherings were banned. Cole's is not making money from this event yet, but it is attempting to help performers by adding the comedian's Venmo handles when they do their online set.

Kumin recognized it's not a perfect substitute, but the virtual event offers an escape.

"Stephen Colbert said something like, 'When you're laughing, you're not in a place of fear.' You have to be thinking to be laughing. And, you have to be engaged and in the moment. And, if you are all of those things, then you are not thinking about how scary it is outside."