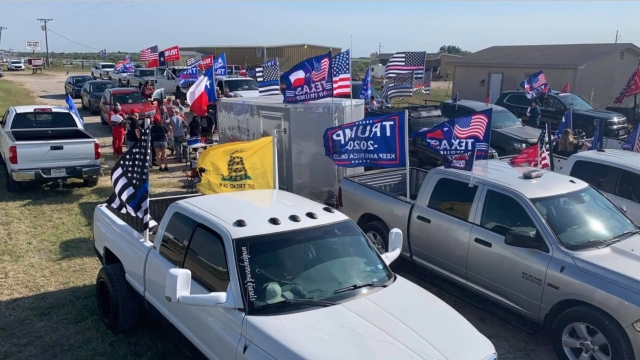 Among the rallies planned for this final weekend before Election Day: One with stops at 200 plus locations nationwide. It's the biggest event yet organized by a new group called "MAGA Drag The Interstate."

The group started this summer in Texas and now boasts thousands of followers across the country. It disavows violence, racism and bigotry on its website.

But when a counterprotester showed up earlier this month with anti-Trump music at a rest stop in Denton, Texas, where the group listed an event, violence ensued.

44-year-old Jason Lata was seen on a phone recording approaching the counterprotester and screaming, "Turn it off!" in reference to the music. Lata then punched the counterprotester with enough force to knock his tooth out, according to a press release from Denton police.

Police would later find and arrest Lata on assault with bodily injury charges. The victim's lawyer, Houston attorney Loren Klitsas, says his client was also diagnosed with a concussion and PTSD.

Most of MAGA Drag's gatherings have been peaceful. The organization's website says it is an "assemblage of patriots ... tired of seeing our Country attacked and slandered by violent and seditious radicals, and we are going to make our voices heard."

MAGA Drag says it wants to host rallies in a "family friendly" way. Newsy found that the group's founder, Keith Lee, has joined in on conspiracy theories and promoted the events with more militant language in online forums, such as one with the tagline, "The Battle Has Begun."

"We're to the point now. We're on that precipice," said Lee in the online show that was promoting MAGA Drag The Interstate. "This is our last attempt to unite the country peacefully, because we're tired of it. We are tired of the Marxist stuff that’s embedded in our government, and I agree totally with what Rampage is saying," said Keith Lee.

Lee also posted on Twitter, deputizing himself as a "digital warrior" for the QAnon movement while using the hashtag "qarmy."

He also tweeted: "I'm so proud of the PATRIQTS standing up and fighting back. What they Feared is finally here."

"Look, QAnon has been declared by the FBI as contributing to domestic terrorism," said Heidi Beirich, co-founder of the Global Project Against Hate and Extremism.

Beirich was invited by a House Armed Services subcommittee to brief members on threats from extremists earlier this year.

"QAnon is a conspiracy theory that believes that the Democratic Party is involved in pedophilia and child trafficking around the country," said Beirich. "That is one of the most extreme political movements that is out there right now."

She says QAnon has inspired one violent incident after the next, including kidnappings, a standoff at the Hoover Dam and a break-in at the Canadian prime minister's home. Beirich is especially concerned about they type of crowds MAGA Drag's founder is advertising the group to.

"In a situation like this, you're signaling to some very extreme people to show up, and then we don't know what's going to happen," she said.

Maga Drag The Interstate and its founder did not respond to request for comment.

Support for the conspiracy theory within the Republican Party has grown in recent years. MAGA Drag's links to the movement did not stop the Republican parties of Tennessee, Texas, Oklahoma County and other local GOP chapters from promoting its events.

"Nobody seems to be taking responsibility to keep the extremes out of the party," said Beirich.

"It's not about peaceful protests in support of President Trump. There would be nothing wrong with that at all. But once you throw QAnon in the mix and some of this militant language, we're talking about a different animal in there."

"If we have weeks of contest over different voting places, lawsuits and what not, these groups are going to be in the streets. They're going to think that the election is being stolen from them," said Beirich, who is concerned about both skirmishes or possible terrorist attacks ensuing. "That is the most concerning thing."