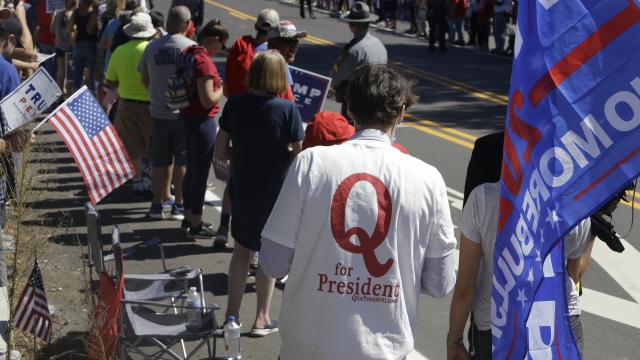 By Tyler Adkisson
March 2, 2021
QAnon followers think an act of Congress did away with the U.S. government in the 1870s, and that Trump will become 19th president of a new Republic.
SHOW TRANSCRIPT

Some QAnon promoters are clinging to the idea that Donald Trump will be inaugurated as president this Thursday, on March 4.

QAnon’s latest conspiracy theory seems to borrow from the sovereign citizen movement, which believes that an act by Congress in 1871 did away with the U.S. government, and installed a corporation in its place, rendering every president and law passed afterward as illegitimate.

The timeline and logic are hard to follow, but QAnon followers predict Trump will be sworn in on March 4, because that was the start date of new U.S. Presidents until it was changed in 1933.

"They claim that the last legitimate president was Ulysses S. Grant and that now Donald Trump, instead of being the 45th president, will become the 19th president of the restored constitutional republic. January 20th was just a fake inauguration," said Jack Bratich, associate professor of journalism and media studies at Rutgers University, and author of "Conspiracy Panics: Political Rationality and Popular Culture."

"Sovereign citizens already had this date and had that kind of belief system as part of their overall ideology, and because it's baked in, it's got a level of legitimacy to QAnon that it might not have that they've just made one up out of thin air," said Kurt Braddock, assistant professor of public Communication in the School of Communication at American University.

Experts told Newsy while there is some ideological overlap between the groups, it doesn’t appear as if they’re strongly tied to one another.

"The sovereign citizen nonsense is what let them make March 4th a thing, and that's the thing about QAnon — is that it will take anything that exists and grab it to make it a part of the movement if it furthers the movement," said Mike Rains, host of the Adventures in Hellwqrld Podcast.

"By pulling it into their ideology, it allows them to maintain their overarching narrative that Donald Trump is going to come save everybody. They take bits and pieces from different ideologies to construct what they see as a coherent belief system that serves as a guide for behavior," Braddock said.

"All of these things were just niche sovereign citizen silliness until Q needed it," said Rains.

The conspiracy has been spreading on mainstream and alternative right-wing platforms. In one QAnon associated Telegram chat with 21,000 followers, a user said “I’m giving this until March 4, I am packed and ready for civil war.”

Several prominent QAnon promoters also are trying to distance themselves from the March 4th prophecy. One channel with more than 190,000 followers wrote a widely circulated message that claimed that they aren’t advertising anything related to a March 4th event, and urged their followers to avoid any groups planning or advertising events around it.

"The problem for QAnon is that it is so decentralized and it is so unruly and there's like no one that speaks for the entire movement. It's entirely possible you're going to have a radicalized sect of QAnon believers who don't go on the proper social media networks to know, 'don't do anything bad, don't plan to cause a riot somewhere on March 4th,'" Rains said.

When the prophecy does eventually fail, Rains said that we could see some QAnon followers become disengaged and leave, like after the inauguration of Joe Biden. But it’s likely a core group will remain.

"That was a moment where some people are like, 'Wait a minute, what's going on here? This ain't working.' But there are just so many people that want to believe and that want to be a part of this community," said Rains.