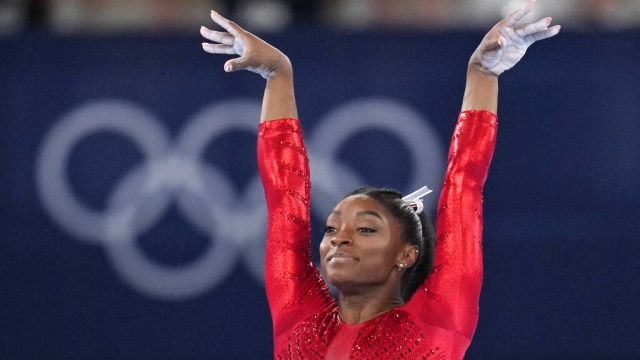 SMS
Putting 'Mental Health First,' Biles Withdraws from Team Competition
By Matt Simon
By Matt Simon
July 27, 2021
Biles has been outspoken about the importance of mental health for some time.
SHOW TRANSCRIPT

“I didn't want to do something silly out there and get injured,” said Simone Biles Thursday.

As Simone Biles stepped onto the floor in Tokyo Tuesday night she says she felt the weight of the world on her shoulders. And she said something felt off. As she performed the vault in team competition she modified her plan, simplifying it, from two and a half twists to one and a half. But she didn’t stick the landing. Moments later, she walked off the floor, then, withdrew from the team competition. Team USA took silver, falling to Russia.

Biles has a unique history with team USA Gymnastics: she’s not only the face of the team, she’s also the only member of the team still competing that endured sexual abuse by the team’s former doctor, Larry Nassar.

Dominique Dawes was part of team USA's “Magnificent Seven” in 1996... and spoke about Biles in an interview with Newsy before the 24-year-old withdrew.

“And she stated that if she were not on the floor competing, that she believes that our federation would just sweep it under the rug, and she's right.  I love the fact that she is secure enough in herself, confident enough in herself and courageous enough to speak her truth. And know that she's speaking her truth to a group of individuals that maybe don't even really want there to change or they don't want the truth to come out,” said Dawes.

Simone Biles posted on social media this week about her mental struggles, and when it impacted her performance, she decided to back out of the team event.

"Yeah, I say put mental health first because if you don't then you're not going to enjoy your sport and you're not going to succeed as much as you want to. So it's okay sometimes to even sit out the big competitions to focus on yourself. It shows how strong a person and competitor you really are, rather than just battle through it," said Biles.

Biles is still scheduled to defend her Olympic title in the all-around final this Thursday. I’m Amber Strong for Newsy.