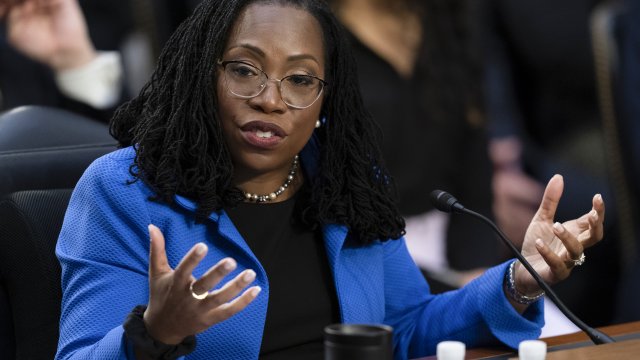 Judge Ketanji Brown Jackson’s record of sentencing child pornography offenders was a major theme from Republicans during her confirmation hearings.

"What’s striking is, in these cases, in half of them, in five, you sentenced the defendant to the absolute lowest sentence under law,” said Sen. Ted Cruz.

But those cases represent just a small portion of her judicial record.

Jackson says she’s presided over 14 cases dealing with child sex crimes. And she issued sentences in line with the probation office recommendations in 10 of those.

“One prosecutor said, ‘I don’t observe any bias. And the judge was fair to all sides in connection with sentencing and all aspects.’ another prosecutor remarked, ‘judge jackson displayed the highest level of competence and integrity throughout the proceedings. Her rulings on the state of the law were reasoned and steeped in authority,’” said Joseph M. Drayton, a member of the Standing Committee on the Federal Judiciary for the American Bar Association.

Overall, Jackson authored 578 opinions as a federal district judge. Less than 3% of those decisions were reversed or criticized by a reviewing court.

The American Bar Association review found no concerns with her judicial decisions, giving her a “well qualified” rating.

“We heard consistently from not only defense counsel, but prosecutors, how unbiased Judge jackson is. We heard phrases like ‘doing things by the books,’” said D. Jean Veta, a member of the Standing Committee on the Federal Judiciary for the American Bar Association.