Putin Threatens To Target US If Missiles Are Launched In Europe 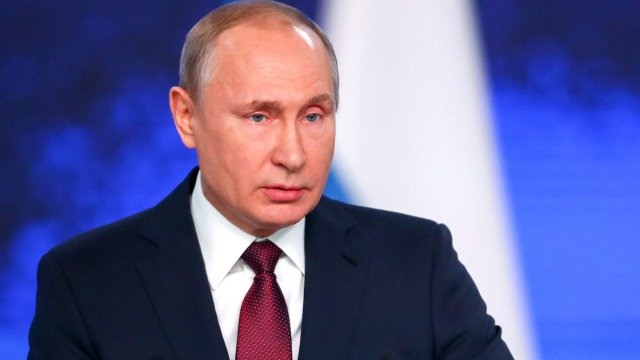 SMS
Putin Threatens To Target US If Missiles Are Launched In Europe
By Briana Koeneman
By Briana Koeneman
February 20, 2019
Russian President Vladimir Putin warned his country will target the U.S. if Washington launches new intermediate-range missiles in Europe.
SHOW TRANSCRIPT

During his annual address to Parliament, Putin said Moscow doesn't want confrontation and won't be the first to deploy missiles after the suspension of the Intermediate-Range Nuclear Forces Treaty.

But Putin vowed to retaliate if the U.S. launches missiles in Europe. He said Russia will not only target the host countries, but it will create new weapons to take aim at U.S. decision-making centers.

Reuters quotes him as saying, "It's their right to think how they want. But can they count? I'm sure they can. Let them count the speed and the range of the weapons systems we are developing."

The U.S. announced earlier this month it was pulling out of the INF treaty, which effectively bans both sides from deploying land-based nuclear missiles with certain distance ranges in Europe.

The U.S. says Russia developed a cruise missile system that violates the Cold War-era pact. Moscow has acknowledged the missile system in question exists. But it denies breaching the treaty, and it has refused a U.S. demand to destroy it.

Late last year, the U.S. warned it would walk away from the treaty if Russia didn't comply with the terms by Feb. 2. It will take about six months for the U.S. to formally withdraw from the pact.