Restaurants Are Pushing To Get More COVID Relief Money 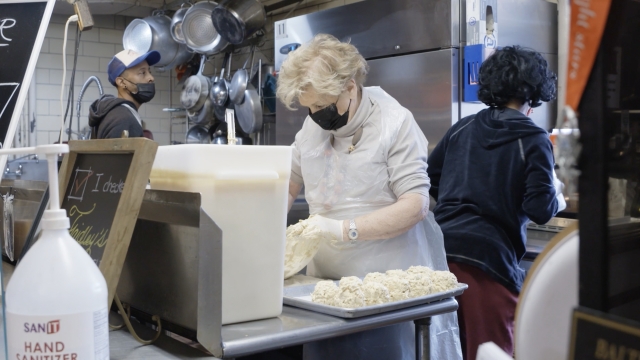 Two years after the pandemic began, restaurants nationwide are still struggling to survive.

"This January was probably the worst January in traffic flow that I've ever seen," said Damye Hahn.

Hahn and her family own Faidley's Seafood in Baltimore's historic Lexington Market. She's one of thousands of restaurateurs asking Congress to add more money to a COVID relief fund specifically for restaurants.

The Restaurant Revitalization Fund provided $28.6 billion to bars, restaurants, lounges and bakeries across the country, but over 175,000 qualified locations, including Faidley's, were shut out of the first round of relief.

There simply wasn't enough funding to go around, which was particularly painful for Hahn's family, who were initially told they would get priority funding because of Faidley's veteran and female ownership.

"Honestly, it would have changed a lot of pressure," Hahn said. "This building that has been here since 1950 is being abandoned by the city. They're building a new building next door, and we don't have the funds to move, so it would have meant a lot."

They did everything they could think of to survive the past two years.

But the financial toll is adding up.

"Like most places, when you don't have enough income coming in to pay your payroll, it's personally financed by the owners," Hahn said.

A survey by the Independent Restaurant Coalition found 80% of businesses that didn't receive Restaurant Revitalization Funds are in danger of permanently closing.

"Basically fourth quarter of last year, things really did take a turn for the worse, and we're running out of money," said Steve Valenta, the owner of the Mighty Bowl in Vancouver, Washington.

Congress knew the first round of funding passed in 2021 wasn't enough for every restaurant in need. Democratic Sen. Maria Cantwell of Washington is working on a bill that would make about $60 billion available to owners who didn't get funding the first time around.

"I'm hopeful that we'll be able to come together on this because, you know, it is a crisis," Sen. Cantwell said. "These people are barely hanging on. They should have gotten the help and support."

The National Restaurant Association estimates that fully replenishing the fund would save 1.6 million jobs.