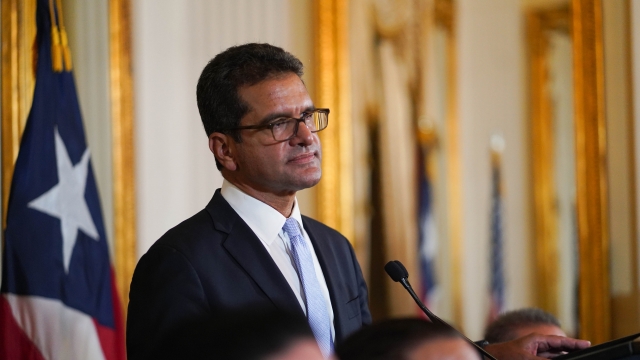 The Puerto Rican Senate has filed a lawsuit aiming to remove newly appointed Gov. Pedro Pierluisi on constitutional grounds. On Monday, the island's Supreme Court agreed to vote on the suit and gave all parties until Tuesday to file their paperwork.

Pierluisi was appointed Secretary of State by former Gov. Ricardo Rosselló, who resigned Friday amid controversy over offensive group chat messages. The island's House of Representatives confirmed Pierluisi as Rosselló's replacement on Friday in a 26-21 vote. The Senate was expected to vote on his confirmation Monday, but Pierluisi's promotion was expedited based on Puerto Rico's constitution and a 2005 law that says a secretary of state does not have have both chambers' approval to step in as governor.

The Senate's lawsuit asks the high court to declare that 2005 law unconstitutional, which would void Pierluisi's confirmation. It also wants a preliminary injunction ordering Pierluisi to cease his functions as governor immediately.

The Senate says Pierluisi's swearing-in was invalid because he didn't fully take over the secretary of state position before Rosselló resigned.

But Pierluisi stands by the law and says since the House and Senate were in recess at the time, his swearing-in as secretary of state was legal. He said in a statement on Monday, "With the utmost deference to the Supreme Court of Puerto Rico, I will wait for its decision, trusting that what is best for Puerto Rico will prevail."

Former Secretary of State Luis G. Rivera Marín stepped down on July 13, as he was linked to the same group chat controversy as Rosselló. Justice Secretary Wanda Vázquez was next in line to take Marín's place, but she didn't want the job. So Pierluisi was confirmed as the new secretary of state last month.

Pierluisi formerly gave legal advice to the federally created board supervising Puerto Rico's finances, including its bankruptcy cases. That's made his promotion controversial and unpopular.