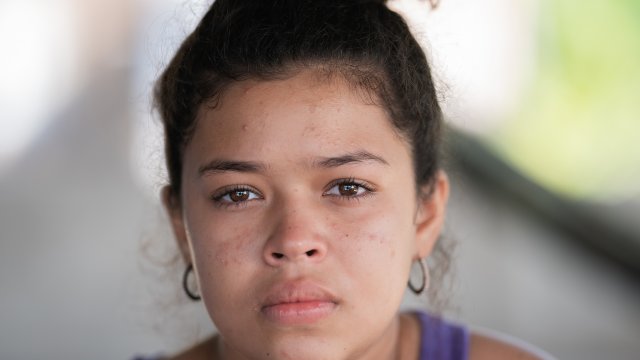 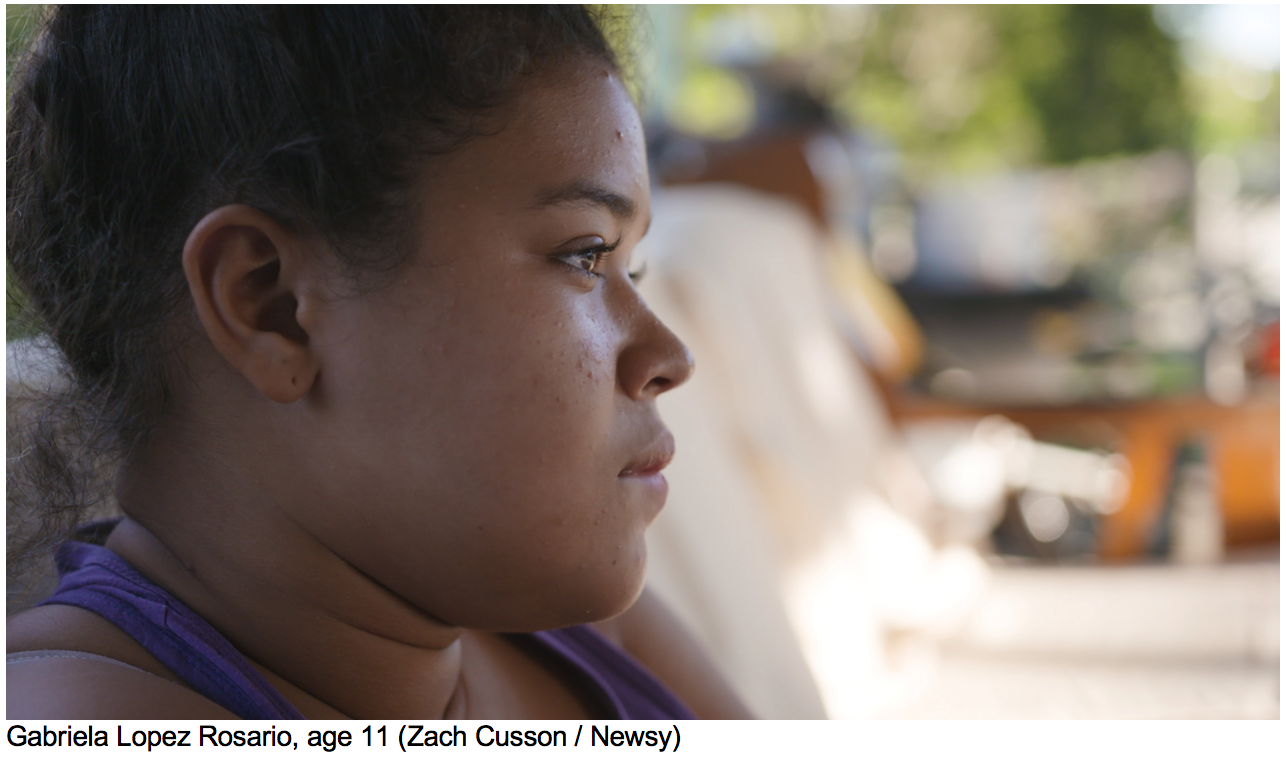 GUÁNICA, PUERTO RICO -- Gabriela Lopez Rosario fills another weekday afternoon outside in the shade of her family’s carport playing Trouble with her sisters.

She should be in school.

She’d rather be in school.

It had been almost a month since she sat in her sixth-grade classroom in the Agripina Seda middle school, much of it leveled by a magnitude 6.4 earthquake just after New Year’s.

“It makes me feel very sad,” she said. “My dream is to be a forensic scientist. But now that there is no school in Guánica, it is a little more difficult.”

Southwestern Puerto Rico’s earthquake swarm this winter was only the latest setback for children being educated in the U.S. territory.

This is the third school year of upheaval after twin historic hurricanes, an island-wide blackout, and the resignation of the secretary of education.

“The future for those students is kind of dark,” said Grichelle Toledo, secretary general of the teachers union, Asociación de Maestros de Puerto Rico-Local Sindical. “We are worried.”

Before there was earthquake damage, many of the island's schools remained in a state of disrepair after hurricanes Irma and Maria pummeled the island in 2017.

“You have classrooms that have rats,” Toledo said.

Hundreds of schools are under assault by another menace, this one microscopic: mold.

Rainwater trickles into classrooms through roofs still leaking more than two years after the storms.

A Newsy investigation has found plans to fix schools and millions of dollars to pay for repairs sitting untouched, stuck in Puerto Rico’s bureaucratic limbo.

The Puerto Rico Department of Education, PRDE, has not acted on recommendations from its own consultants and the U.S. Environmental Protection Agency about eliminating mold to prevent impacts on health, especially for children who suffer from asthma.

Exposure to it may play a significant role in causing asthma attacks, the EPA says.

And Puerto Rico has yet to spend any of the quarter of a billion dollars in Hurricane Maria FEMA aid approved for mold removal and other emergency repairs.

‘Immediate mold remediation is a must’

Teachers across the territory shared videos and photos with Newsy of damage inside their classrooms from hurricanes.

They reveal cracked walls and ceilings where rain seeps through. One teacher’s cellphone video sweeps across a room at Florencia Garcia high school in the eastern part of the island where waste baskets strewn among desks collect rainwater.

“There are a lot of schools still waiting after Maria, two and a half years, to be rebuilt,” Toledo said. Teachers and staff told Newsy they arrive early and stay late to scrub moldy surfaces with vinegar. They apply fresh coats of paint on curdled walls, resorting to do-it-yourself solutions nowhere close to the kind of mold remediation the EPA prescribes.

"We took money from our own pockets to repair an exterior wall so the water leaves," said Ineabel Rivera, the director of Rafael Aparicio Jimenez middle school in Adjuntas. 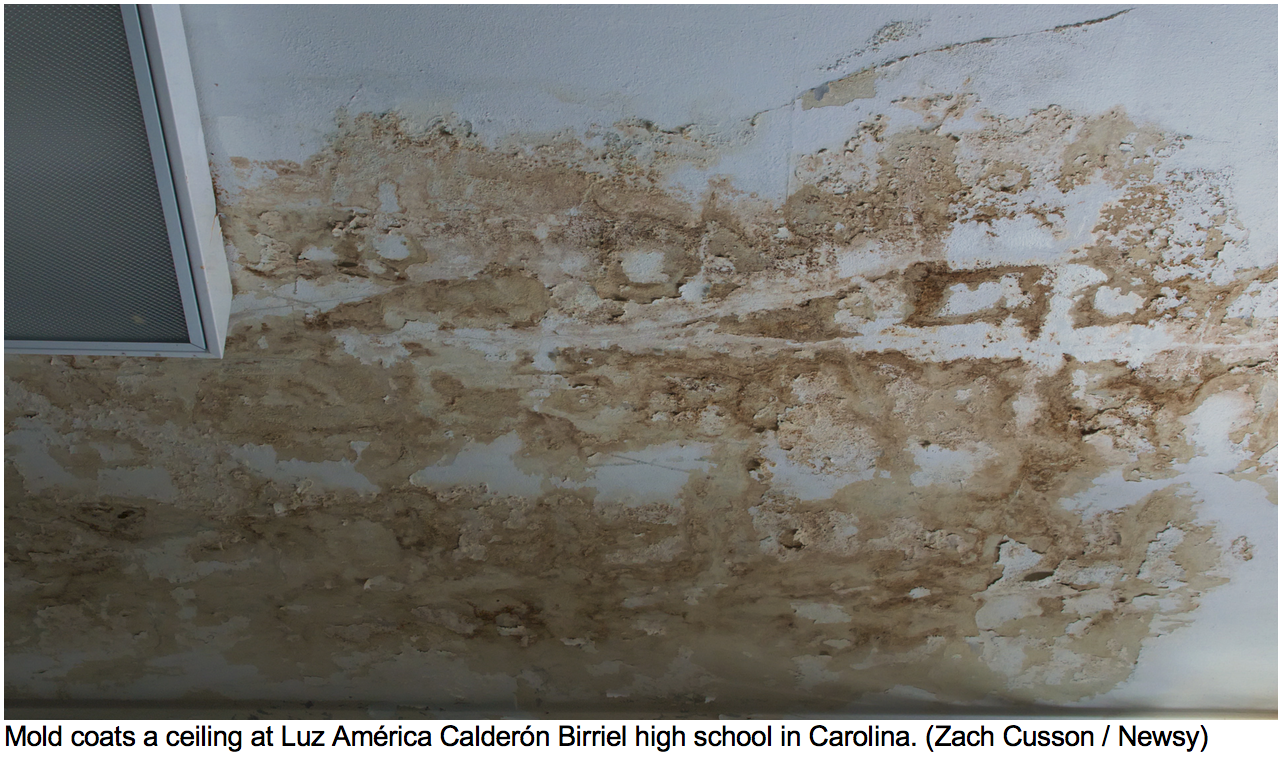 They rearrange desks around wherever water happens to be dripping from ceilings on a given day.

"We were coping with what we had because we needed to continue with the education system,” Toledo said.

Mold was so thick after Hurricane Maria at the Jimenez school that an inspection report commissioned by the island’s Department of Education recommended it not reopen.

“Immediate mold remediation is a must – health and safety issue,” the November 2017 report from the Council of the Great City Schools said. “School should remain closed until all mold has been remediated.”

The PRDE reopened the school against that recommendation, despite no plan to replace the tattered roof or to eliminate the mold, which has spread. Rivera has closed off the musty school theater and gym, both missing sections of roofing.

She relocated classes out of two rooms that flood repeatedly, coating floors in a film of mud.

School overcrowding has left her no choice but to hold classes in moldy rooms.

Rivera said she believes mold is harming the health of her students and staff.

“I am constantly sick,” she said.

FEMA has granted money for emergency repairs in Puerto Rico schools. It just hasn’t been spent.

The agency and PRDE worked together to dispatch teams out to the island’s schools during the summer of 2018 to document and photograph storm damage, making special note of mold growth.

FEMA’s effort and promise of funding would “contribute greatly to the well-being of students and parents, and provide certainty that our students will be attending safe schools,” said Julia Keleher, Puerto Rico’s education secretary at the time.

In the end, Congress and FEMA granted $258 million for Hurricane Maria school repairs, including mold removal, issuing funds to the island as recently as April 2019, according to records reviewed by Newsy from Puerto Rico’s Central Office for Recovery, Reconstruction and Resilience.

The dollars were supposed to be shared among schools in each of the school system’s seven regions.

The records show the PRDE has not spent a penny of the money.

PRDE under secretary Eleuterio Álamo Jr. said the department cannot meet FEMA’s requirement that the island spend its own funds first before offering reimbursement from the $258 million pot, a rule designed to prevent fraudulent use of federal tax dollars.

PRDE’s budget for school repairs was $20 million, far shy of the $10 billion the department estimates it would take to restore schools still suffering from hurricane damage.

Álamo said the department plans to use the FEMA money in small increments it can fund up front.

“We don’t have enough state funds in order to do the entire work at the same time,” Álamo said. “It's going to take longer, but we're making sure that at least [the schools] have the minimum requirements to be safe.” 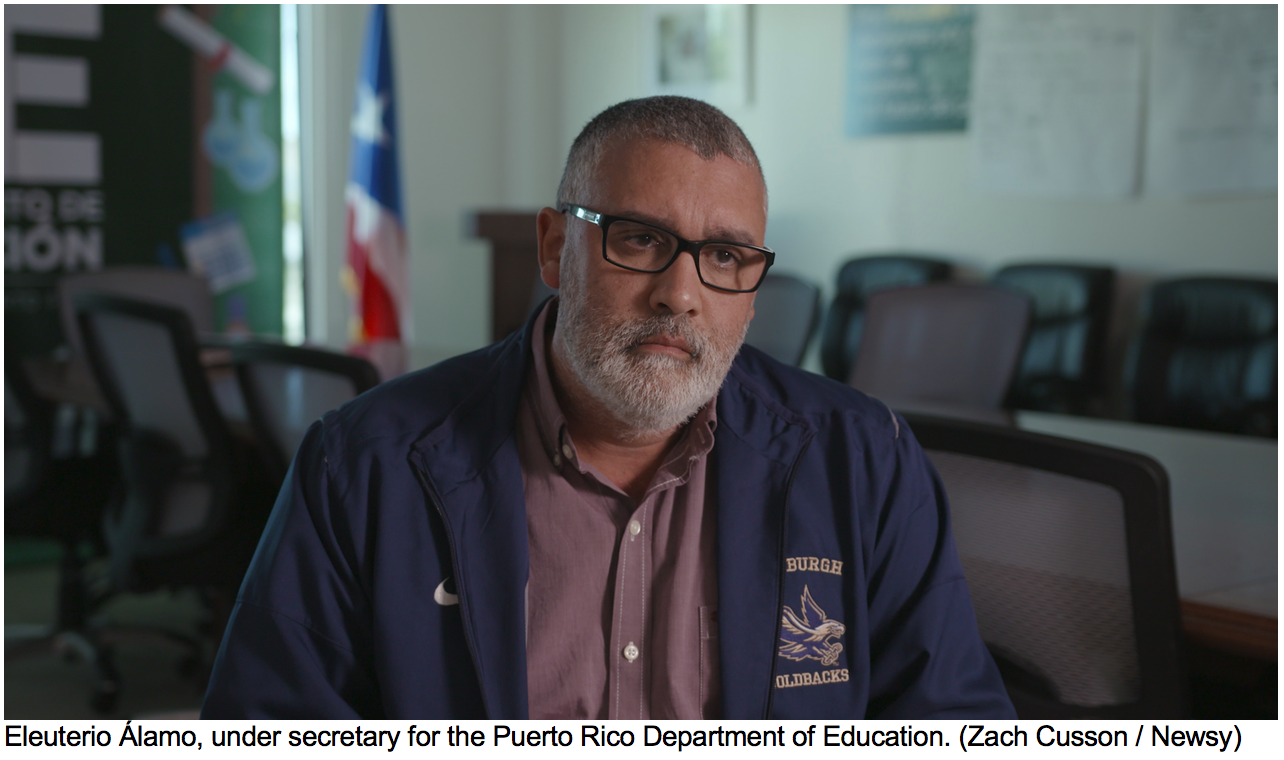 A FEMA spokesman said it has tried without success to find ways to free up the money for Puerto Rico schools, including offering to reimburse some of the school projects as soon as they get underway rather than wait for them to finish.

Puerto Rico’s inability to tap its own recovery aid is not unique to the school system.

The island has spent only 31 percent of the entire $48 billion appropriated by Congress for recovery efforts two years after hurricanes Irma and Maria.

There was a plan coming together to clean mold out of Puerto Rico schools, according to EPA emails obtained by Newsy using the Freedom of Information Act.

At first the PRDE planned for mold removal to occur over two weeks beginning December 2018.

But the work was put on hold after the EPA said school roofs should be fixed first or the mold would just come back.

It wasn't until Feb. 12, 2019, that the PRDE posted a request for contractors on its website for “temporary repairs of roofs, lead abatement, and mold remediation services.”

But contractors were never hired and the mold remediation never happened.

The PRDE canceled the request for proposals two days later.

Then an unrelated scandal rocked the education department later that spring, shaking up leadership at the top. The education secretary resigned just before being indicted on federal corruption charges.

“Nothing has happened since then,” Toledo said. “The Department of Education’s excuse is that they are waiting for funds from FEMA.”

Álamo could not explain why the mold remediation plan was canceled.

The EPA had been working with the PRDE to remove mold because of the impact the spores can have on health, including coughing, wheezing, skin rashes and lung infections in people with compromised immune systems.

Some people feel no effects from high amounts of mold.

For others genetically sensitive to it, the reactions can be severe, especially for those with asthma.

“Asthma is the most common chronic illness in children in Puerto Rico,” said José Rodriguez-Santana, a pediatric pulmonology and critical care specialist between treating patients at his office in Caguas. 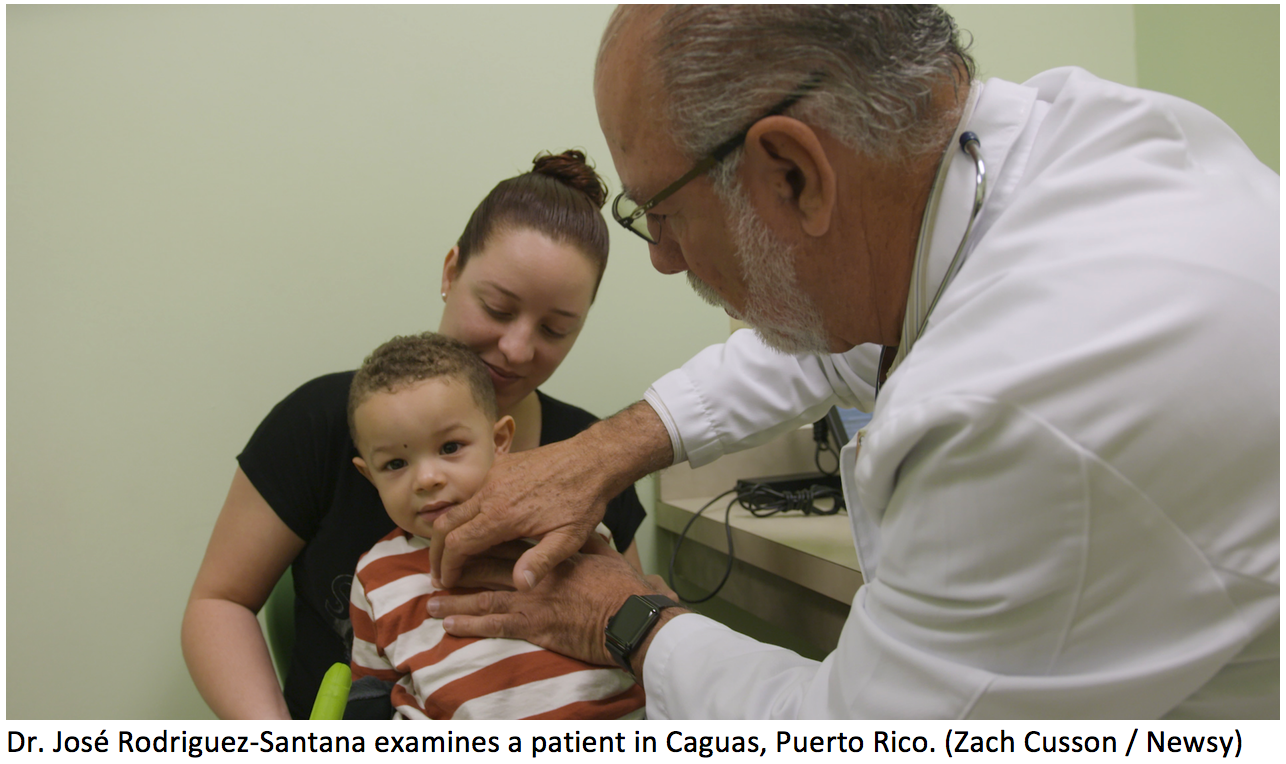 “It's very important to control the environment, where the kid is either home or at school,” he said. “Any intervention to provide a clean school as promoted by the EPA is important to decrease risk for asthma exacerbation.”

Allergists reported a spike in asthma cases after the hurricanes but say it’s difficult to know whether schools are to blame because mold and asthma are so common across the island.

“After Maria, there was so much rain and more mold spores,” Rodriguez-Santana said.

In late January the education department began reopening schools deemed safe after the earthquakes, though still with the same leaks and mold.

The new secretary of education, Eligio Hernández Pérez, announced a plan to begin fixing roofs in several phases, but with just $25 million to be spread among 414 roofs.

The PRDE has not posted another request for contractors to do the kind of mold remediation the EPA says is necessary for healthy classrooms.

“The neglect today for those schools has played a very big role in terms of the students seeing that education is not their answer,” Toledo said. “What they see as an alternative is going back to the streets.”

Gabriela Lopez Rosario resumed classes March 4 underneath tents set up as a temporary replacement for the Agripina Seda middle school.“I still have hope they will fix the school,” she said. 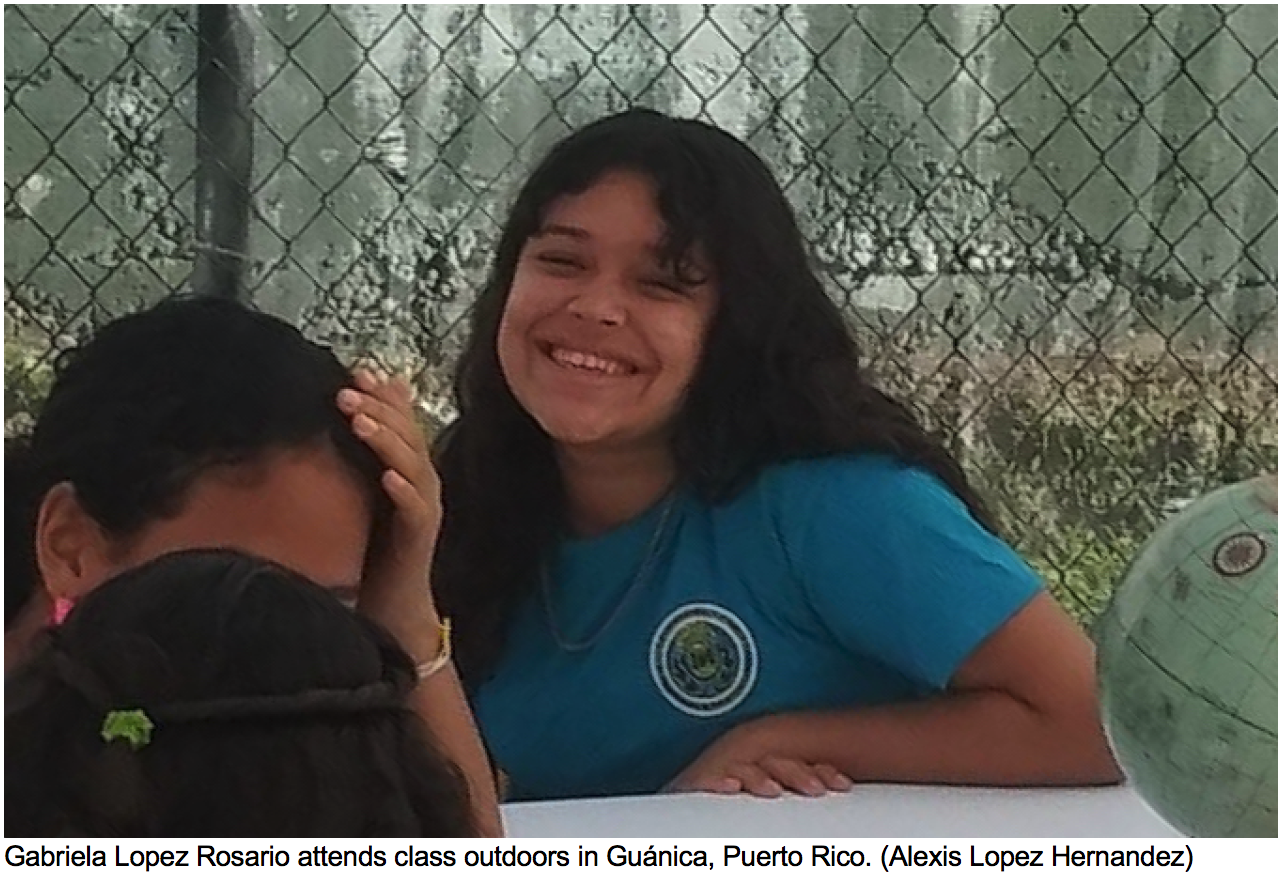 Patrick Terpstra can be reached at patrick.terpstra@scripps.com, or on twitter @patrickterpstra.