This Is The Organization Backing The Central American Migrant Caravan 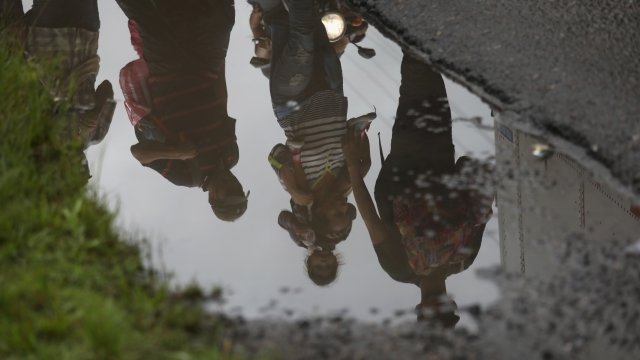 SMS
This Is The Organization Backing The Central American Migrant Caravan

By Melissa Prax
October 22, 2018
For more than a decade, Pueblo Sin Fronteras has backed caravans of people looking to flee violence or unsafe conditions.
SHOW TRANSCRIPT

A caravan of migrants has been making its way toward the U.S. border. And it's caused heated political debate.

As the caravan has moved through countries including Honduras and Guatemala, it's gained more attention. And the migrants are backed by an organization that's offered support for these types of caravans for more than a decade.

The organization, Pueblo Sin Fronteras — which roughly translates to "Village Without Borders" — describes itself as a collective "in permanent solidarity with displaced peoples." That solidarity comes in the form of aid, legal advice or backing for caravans, which can make migrants' journeys safer. 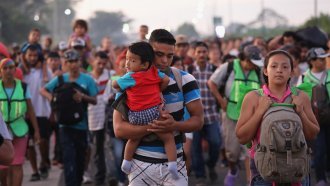 Why Trump Believes Migrant Caravan Is 'A Great Republican Issue'

The Central American migrant caravan that arrived at the U.S. border earlier this year was also backed by Pueblo Sin Fronteras.

One particularly striking part of the caravans over the years is an ongoing connection to the biblical story of Jesus' crucifixion. The journeys are called "Via Crucis Migrantes," or "Migrants' Way of the Cross," and they nod to the Catholic Stations of the Cross procession.

Traveling in a group has its benefits, like safety, but it can also send a message to world leaders to pay attention to issues like violence in Central America. President Donald Trump has used the caravan as a talking point in his push for stricter border security.

Shortly after this Oct. 16 tweet from Trump, Pueblo Sin Fronteras released a statement asking that the U.S. "respect the international right to migrate and to seek asylum and refuge."

The Trump administration has said the caravan has incited violence and won't be allowed into the U.S.