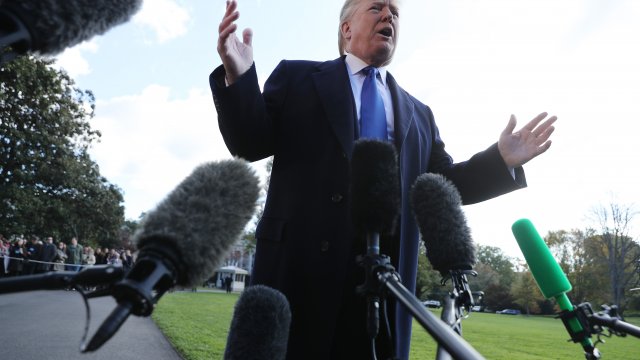 SMS
Why Open Hearings Likely Won't Shift Public Opinion On Impeachment
By Kellan Howell
By Kellan Howell
November 12, 2019
Televised impeachment hearings have shifted public opinion in the past, but that may not be the case this time around.
SHOW TRANSCRIPT

Televised hearings have had a big impact on the public's view toward impeachment in the past, but experts say that may not be the case this time around.

"Most people are not going to be watching this wall-to-wall. They'll probably get it in their feeds, they'll probably get, you know, snip bits here and there, and so you have to imagine that there's going to be less of a media effect on this," said Michael D. Cohen, chief strategy officer at WPA Intelligence, a Republican polling firm.

In 1973, the Nixon Watergate hearings were broadcast on ABC, CBS and NBC, and millions of Americans tuned in nightly to PBS for prime-time coverage.

But the impeachment proceedings against President Bill Clinton were different. For starters, they happened during a lame-duck session after the 1998 midterm elections. Independent Counsel Kenneth Starr had already released his report on Clinton's affair with White House intern Monica Lewinsky, and Americans had largely made up their minds about how they felt.

A Pew Research Center Survey from the time found only 3 in 10 Americans supported impeachment. A Pew survey conducted just after the House voted to impeach Clinton found only 34% of Americans paid very close attention to the public proceedings.

That's due to a combination of increased political polarization and changes in the way Americans consume news.

"I don't know what's going to move here," Cohen said. I think that in this media environment, with this political polarization, with the Republican Party rallying around their leader, with the Democrats rallying around impeachment, I don't see what's going to move until I see it. And at this point, I don't see a situation where someone else saying the thing we already know moves people."