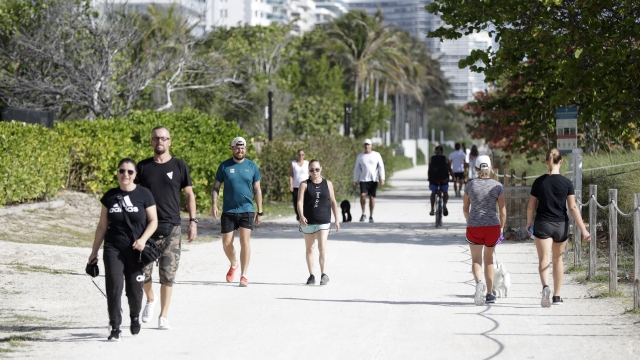 Americans appear to have a hard time adjusting to orders like "shelter-in-place" and "social distancing". And while those terms are now common, psychologists say it's hard for Americans to grasp how their actions as an individual help the greater good.

"So thinking in terms of a pandemic is not something our brains evolved to think of. It is too big and vast," said Dr. Mike Brooks, a licensed psychologist and director of the Austin Psychology and Assessment Center.

"It's really hard for people to process existential threats. We see this same kind of thing with climate change: It's just such a huge problem, and how do we begin to as a global community begin to resolve it?" said Dr. Vinita Mehta, a clinical psychologist and author.

So that's why we're still seeing images of packed beaches and park trails.

"Liberty is very important for us as Americans. So someone coming in, whether it's the government or  what have you, saying you need to give up liberty for the collective is very against our cultural heritage," said Brooks.

In the early weeks of the pandemic, a lot of criticism focused on younger generations and spring breakers who seemingly ignored the guidelines. But experts say their actions are more likely a result of immature brain development.

"They actually don't necessarily have the brain development that says, 'Hey, I’m doing something risky.' And they don't have the brain architecture that has the break that says, 'I really need to stop this and do the safe thing,'" said Mehta.

It can be hard for people to follow the rules if they see other people breaking them. The best way to expand compliance with social distancing and shelter-in-place guidelines is to set a good example for your friends and family.

"I think if we can be models and explain what it is we're doing and why we're doing it. And to, again like we can create those trusted peer networks by stepping up and doing the right thing ourselves," said Mehta.

"In a lot of us, it still has this unreal quality to it. ... But I guarantee the more it impacts people directly, where they see loved ones, family members get sick, you still see some big increases in change of behavior," said Brooks.