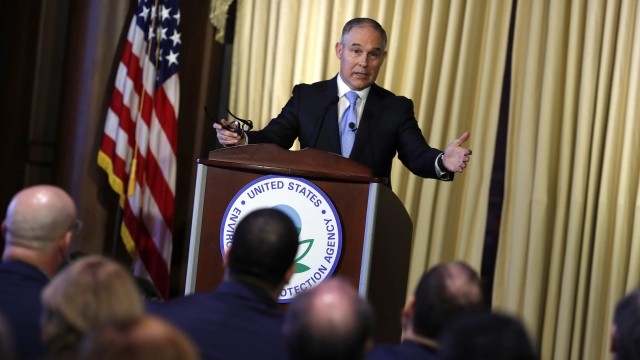 "I believe that we as an agency and we as a nation can be both pro-energy and jobs and pro-environment — that we don't have to choose between the two," Pruitt said.

"You can't lead unless you listen. I seek to listen, learn and lead with you to address these issues that we face as a nation," Pruitt said.

Pruitt was previously Oklahoma's attorney general. In that capacity, he sued the EPA on multiple occasions.

Pruitt's nomination drew criticism from democrats and environmental activists due to his doubts about climate change.

The EPA works to educate the public and sets regulations aimed at reducing the contribution to climate change.

Pruitt also used his speech to lay out some principles he said he hopes the agency follows.

"Process matters, and we should respect that and focus upon that and try to avoid — not try to avoid, but do avoid abuses that occur sometimes. ... We need to be open and transparent and objective in how we do rulemaking and make sure that we follow the letter of the law as we do so," Pruitt said.

His address came the same day the Oklahoma attorney general's office said it abided by a court order to hand over thousands of emails between Pruitt and fossil fuel companies.