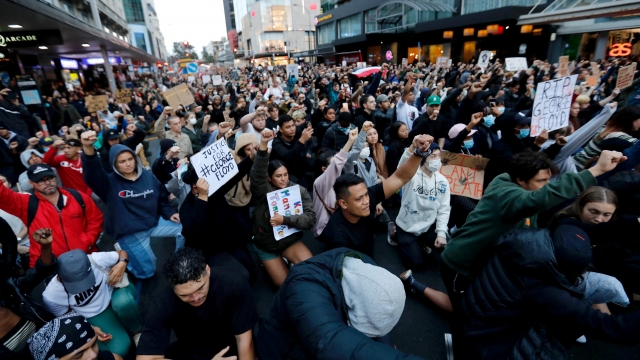 Tens of thousands of people flooded the streets of New Zealand Monday to protest against racial injustice.

China and Iran both denounced Floyd's death Monday. A spokesman for China's foreign ministry called racism a "chronic disease of American society," while an official in Iran expressed solidarity with American protesters.

"To the American officials and police: stop violence against your people and let them breathe," said Iranian Foreign Ministry spokesman Abbas Mousavi.

Demonstrations against police brutality and Floyd's death took place elsewhere across the globe over the weekend. In Europe, protesters in London, Denmark, and Berlin marched on U.S. Embassies in support of American demonstrators. Similar protests were held in several Canadian cities as well, including Montreal where police clashed violently with demonstrators Sunday night.

Australian protesters planned to gather in Sydney Tuesday for their own rally, but it's since been canceled after some people threatened to disrupt the march. Similar protests are planned for later in the week in other Australian cities.