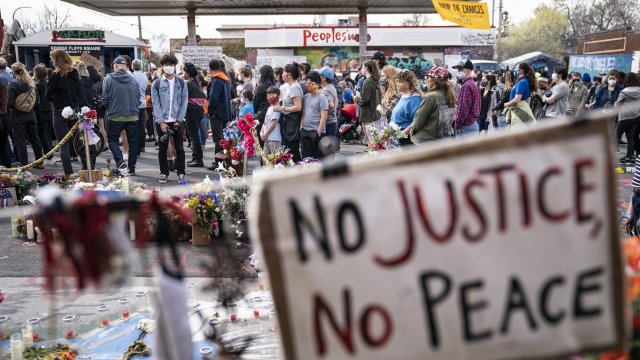 SMS
Protests In Minnesota As Jury Deliberates In Chauvin Trial
By Simon Kaufman
By Simon Kaufman
April 20, 2021
Protesters marched and danced through the streets in downtown Minneapolis.
SHOW TRANSCRIPT

Protesters marched and danced through the streets in downtown Minneapolis.

They called for change, sometimes shouting chants against the police. One of George Floyd's brothers thanked those who have shown their support.

"So many people standing up in this city, standing up for George, standing up for what's right, what they believe in," said George Floyd's Brother, Rodney Floyd. "Because they want to make sure their family member is not another hashtag."

George Floyd's family reacted yesterday alongside lawyers, lawmakers and Rev. Al Sharpton. Sharpton noted he'll be giving another eulogy for a Black man killed during an encounter with the police after the recent death of Daunte Wright.

"This is why this trial is so important," Sharpton said. "Because it was not even a year later that death by police hit this city."